No.1 – Germany – The start of my bike ride around the world 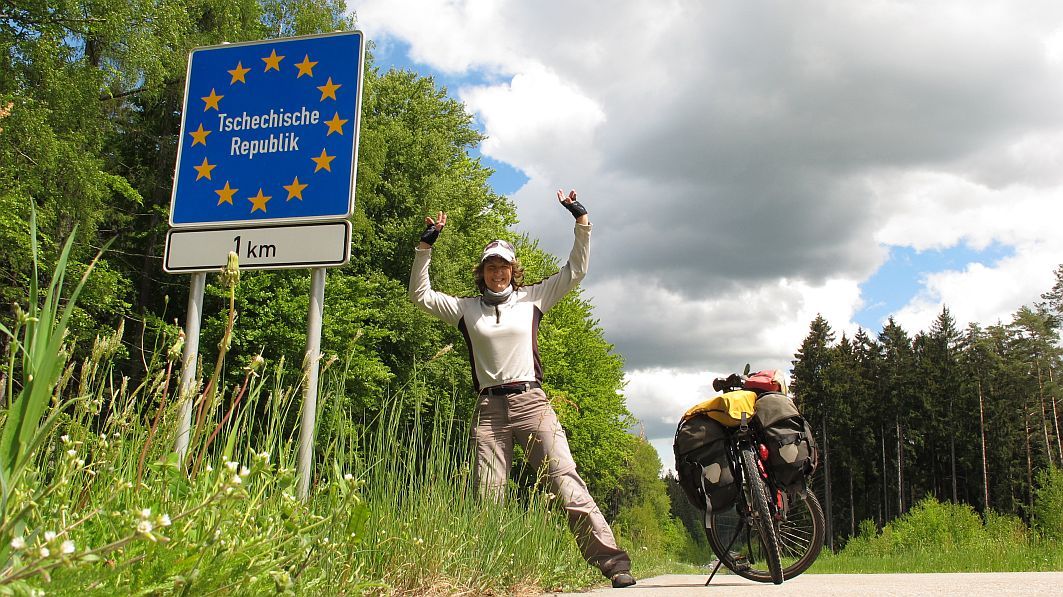 Finally. my trip “Lets go East” started on the 14th of May 2013. It wasn’t easy starting, no not at all. Especially saying good bye to my mum was really hard. I pedalled along the “Bergstrasse”, the sky was grey. But honestly not just the sky didn´t have any colour. I also felt pretty colourless. I was dead tired, worn out and felt empty, but at the same time it was a relieve to start. I cycled without noticing anything, nearly remote controlled and I asked myself, why on earth am I doing this? I tormented myself and I felt really bad.

After about 2 hours I stopped for a break, I just couldn’t do it anymore and I also couldn’t hold back anymore. I started crying. All the stress, the manz thoughts of the past weeks were descending upon myself. But somehow I felt free right from the first moment on. There was something uncertain ahead of me, a trip without an end, a rough plan, an idea and my biggest dream. 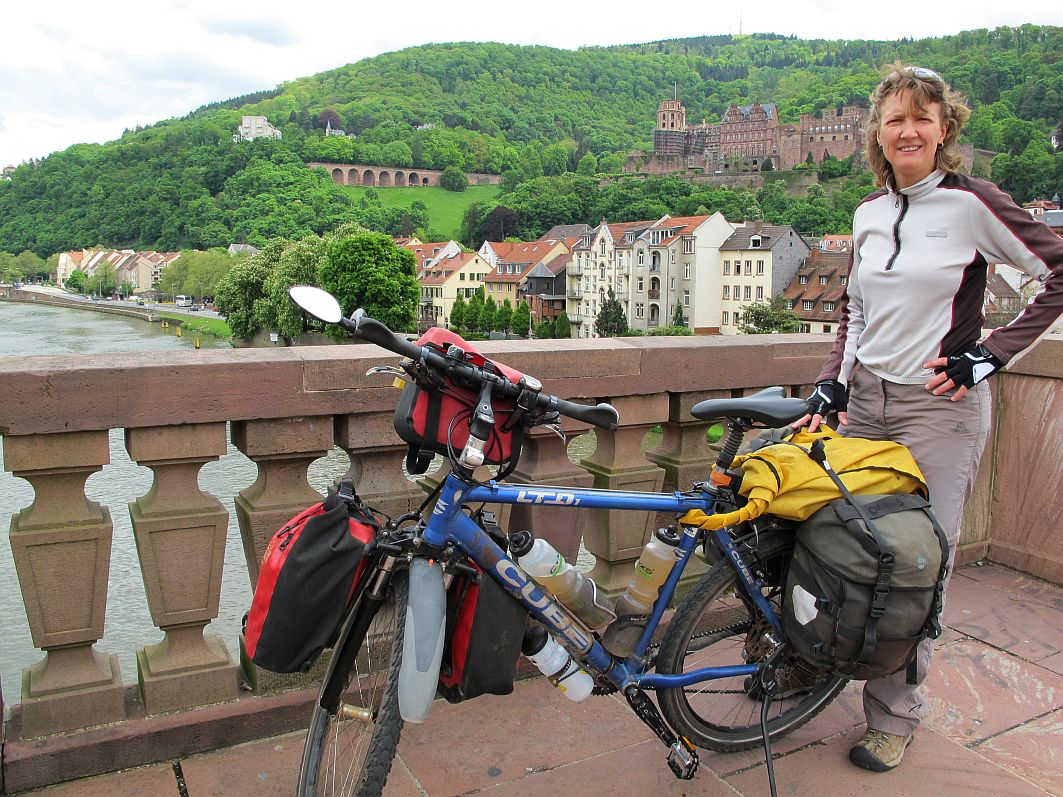 I followed the “Paneuropa-cycle path”. It starts in Paris and goes all the way to Prague. So I joined it halfway in Heidelberg. 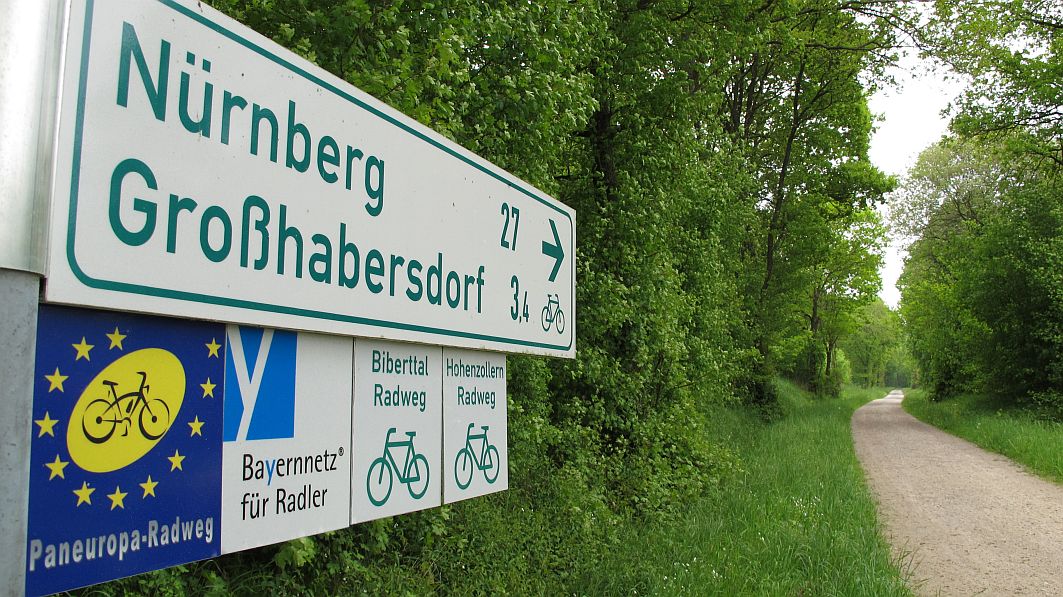 I pedalled along the river Neckar until Neckargerach and pitched my tent there in safe distance to some fishermen, so I could have a safe and carefree night. I was glad to be able to have a good sleep, which I needed so badly. 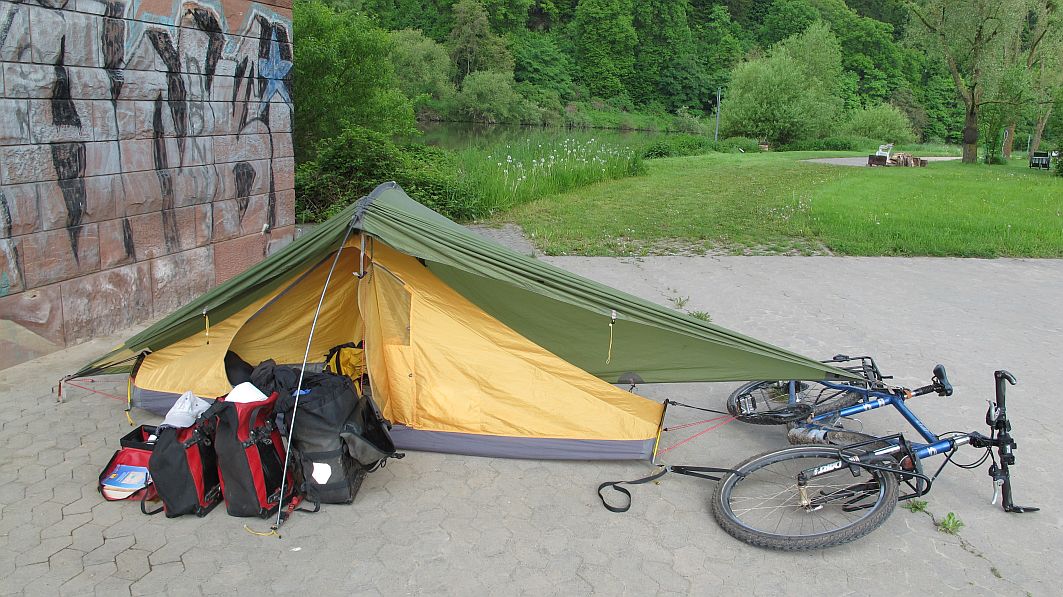 I passed Heilbronn and reached Oehringen. I was really lucky to get an invitation from family back to there home. Having a shower, a free meal and a comfy matrass came at the right time because it rained and I felt lonely. Actually I was absolutely surprised to get an invitation in Germany, I didn’t expect that.

I came through Rothenburg o.d.T., the famous old town and crossed the nice, hilly countryside of Bavaria. Most of the time I spent the nights at parking areas for trailers, so it didn’t cost me anything and I felt safe. Germany is noisy and really urbanised. Some parts are extremly ugly. There seems to be more concrete than anything else, but at some spots I thought, oh it’s quite nice here. The blooming rape fields were nice to look at, the little towns in the northern part of Bavaria were idyllic and the different forests I came through gave me the feeling that Germany has at least a bit of nature to offer. In Weiden, Juergen and his dog invited me for supper and breakfast in their caravan. It was delicious and it was nice to have some company. 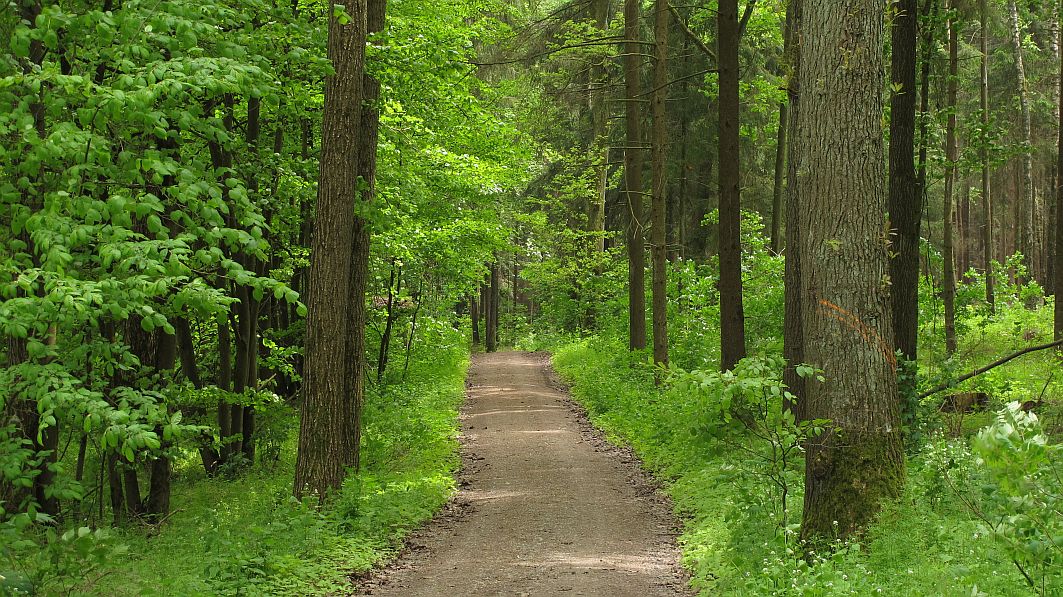 I reached the border to CZ and I was a bit proud of myself given the circumstances of the first days, where I had my doubts even getting that far. Every day it got better, I was getting used to cycling again, my bum wasn’t  sore anymore, the knees were ok and even my back was much better. But most importantly, I started to have fun. 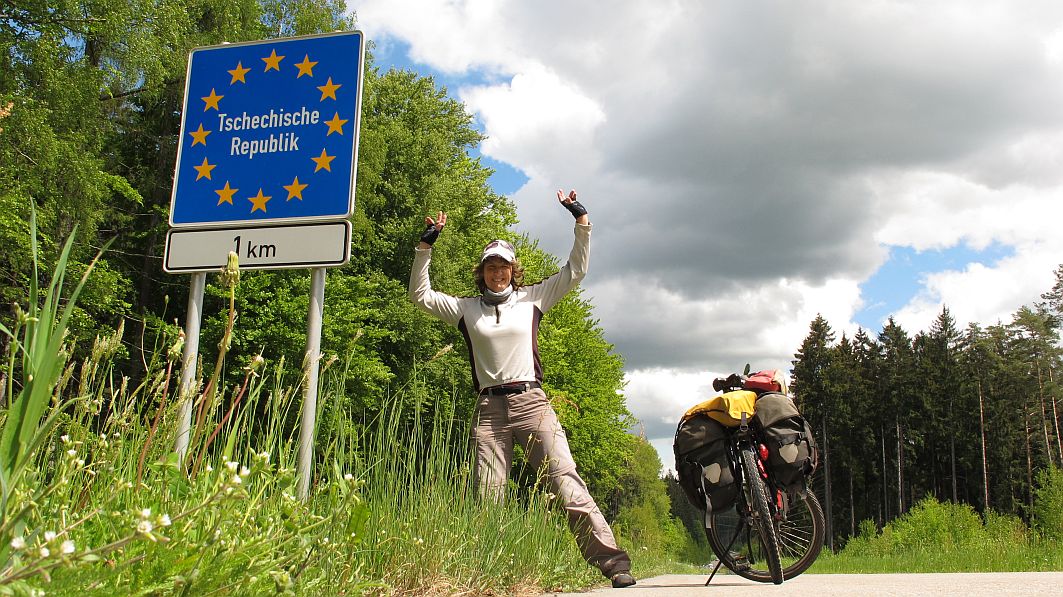 You know, the grass is always greener on the other side and that’s how it felt after I crossed into CZ. It seems to be more colourful and prettier than at home. The cycle path winded its way through pretty patches of forest, along small streams and through tiny villages. Suddenly it was so quiet and so natural. Just lovely. Some of the villages reminded me of the good old GDR times. Grey buildings, broken walls and even the old grocery store Konsum still exists. 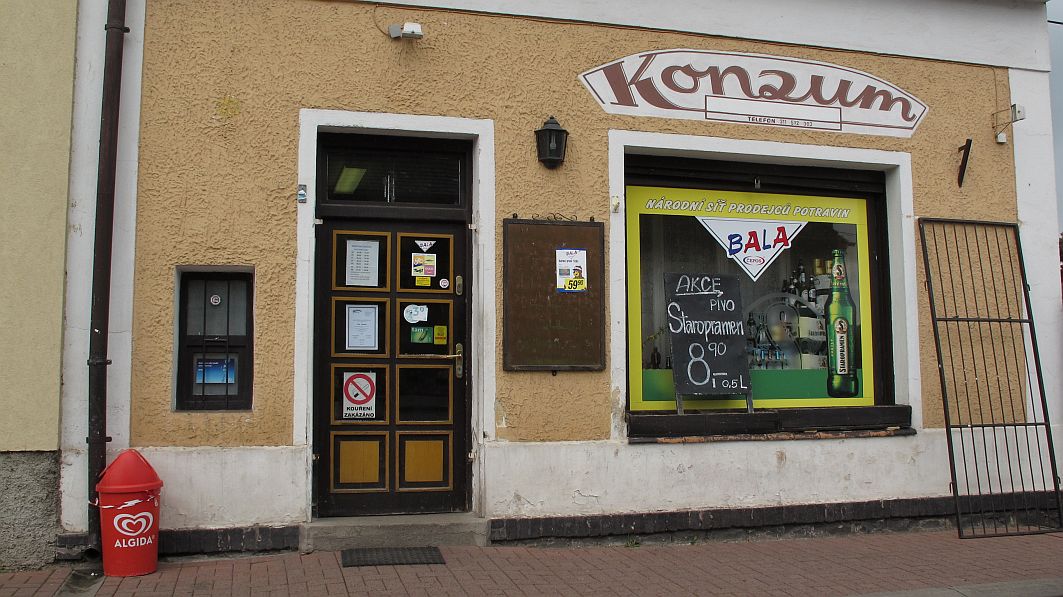 The country is cheap. That´s why I gave myself a treat and stayed for 8 Euro in a pension. I washed my clothes and had a shower.  The people seem to be shy. No one says anything, or ask me anything, not many people are even greeting back. It also seems like that not many people can speak English or German.

The cycle path on the CZ side is as good signposted as it is on the German side. But to my surprise sometimes it leads you even through the fields. The heavy rain of the past weeks turned some of the tracks into mud holes, so it wasn’t a lot of fun pushing the bike through the mud.

The only other long distance cyclist I met so far was a retired Dutch couple. To my horror, they are doing the same distance as me, even with the same load.
My fitness level is a disaster at the moment.

Thanks to heaps of tailwind I managed to pedal the last 100km to Prague in half a day and I was happy to reach my first destination. 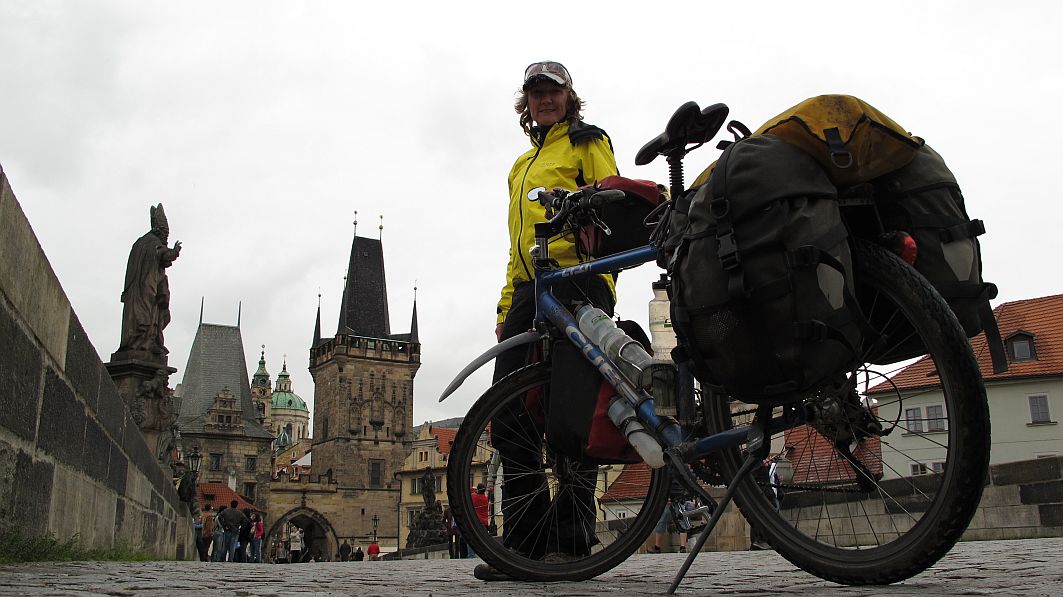 Even if it rained and the sky was as Frey as it was on the first day, I felt much more colourful and happier and full of anticipation of what’s coming up.

The beginning is overcome and the biggest step is done. World, I am on my way.
In Prague I allowed myself a break and strolled around winding lanes, along magnificent buildings and golden decorated church roofs. 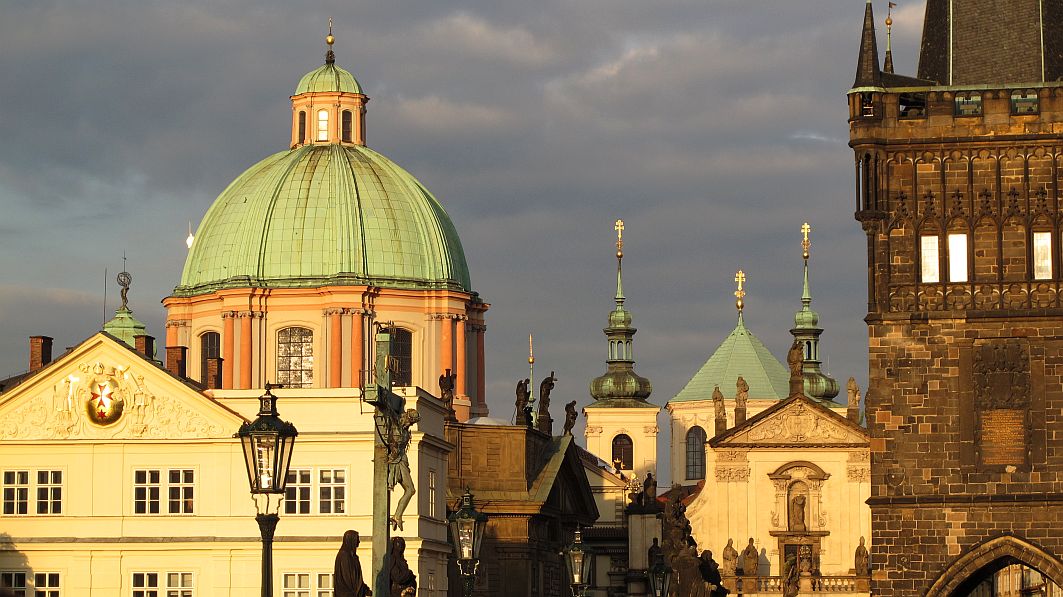 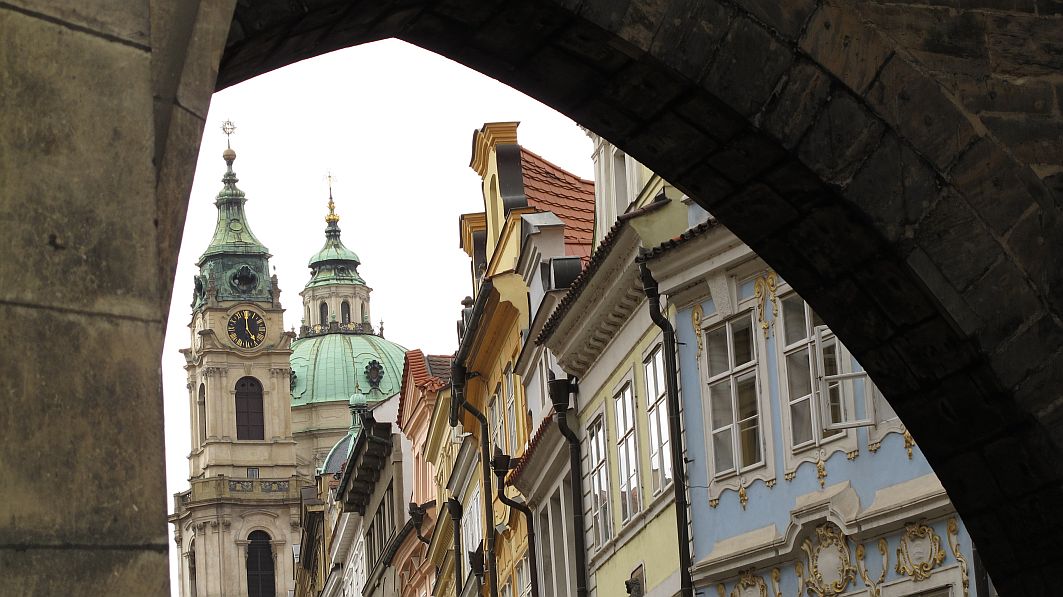 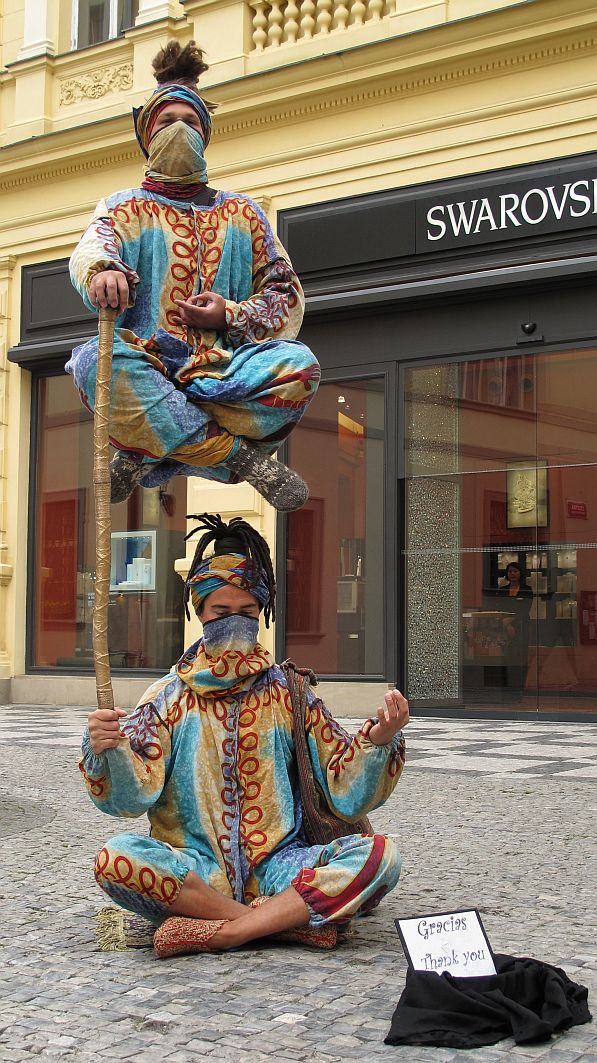 But now I am heading off towards the border of Poland. I would like to visit some National Parks and I am looking forward to nature, silence and solitude.
World, here I come!