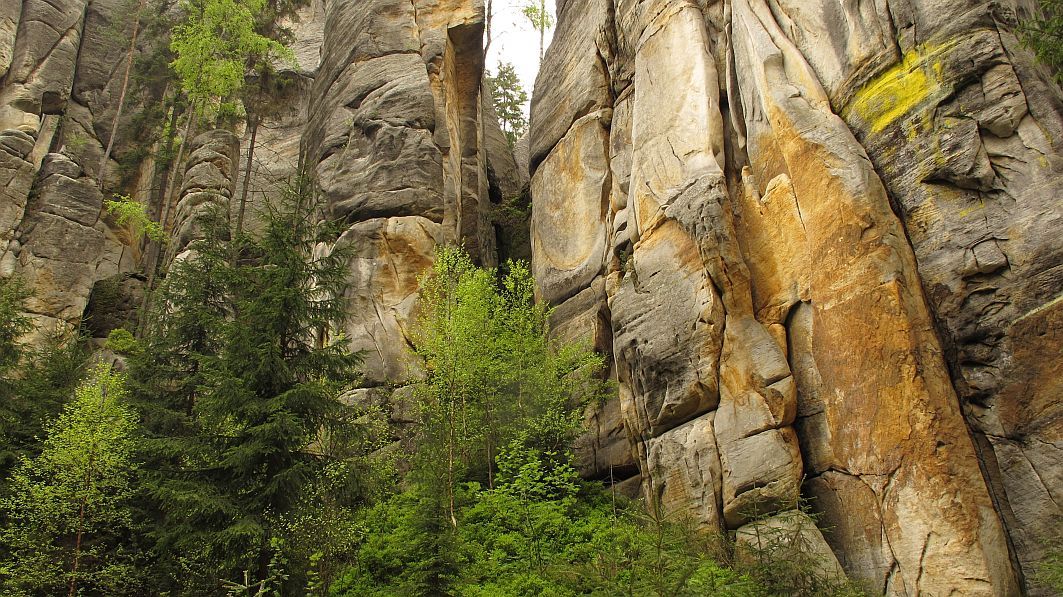 I left Prague on the 24th of May at midday. It´s always a bit tricky to leave a city on a pushbike and also a bit annoying and usually takes longer than expected. But I finally managed to get away from the traffic and I was looking forward to get back to more remote areas.

Not a lot happend the next days besides that a retired old man spoke to me in fluent german and cooked some lunch for me. In addition 3 hunters invited me for a badger goulash in a shelter were I was looking for cover of the rain. The goulash was absolutely delicious, and it was the first time ever for me to eat badger. 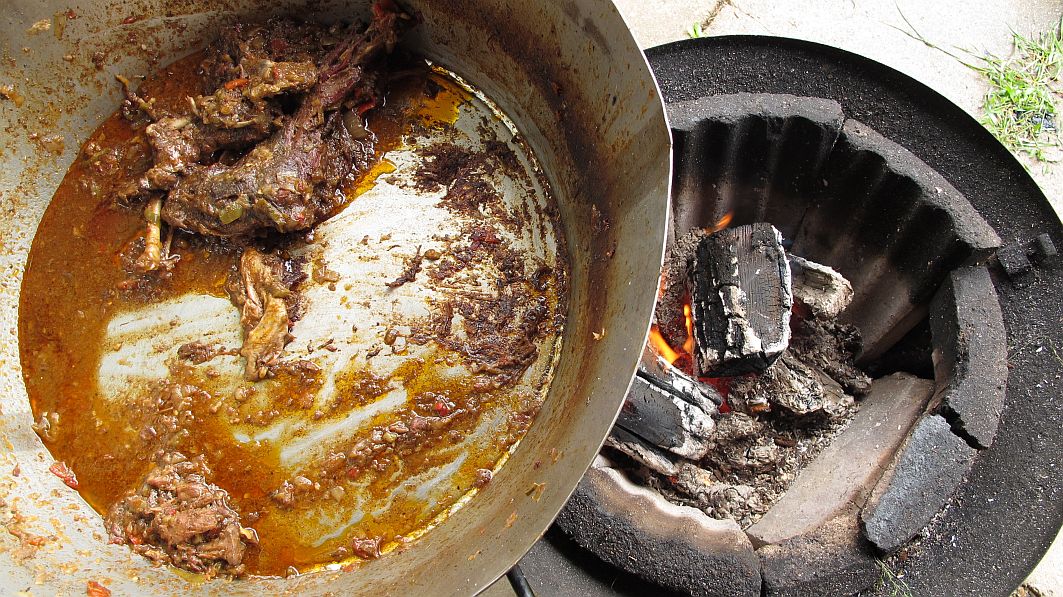 After a long cold rainy cycling day a family picked me up from the street and I could stay at their home and spent the night in a warm comfy bed.

On the last kilometers to Adrspach the scenery as well as the architecture changed. There were more forests and hills than before. The temperature dropped down to freezing 6 degrees C. You can imagine, in those wet conditions absolutely cosy.
The houses were more built out of wood, colourful painted and quite often the roof came down all the way to the first floor. 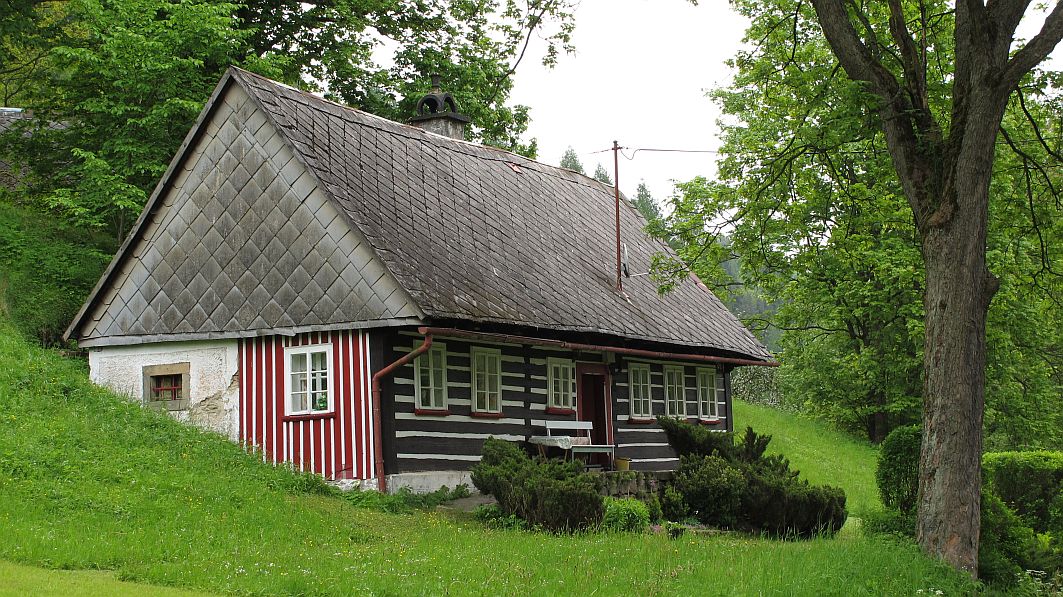 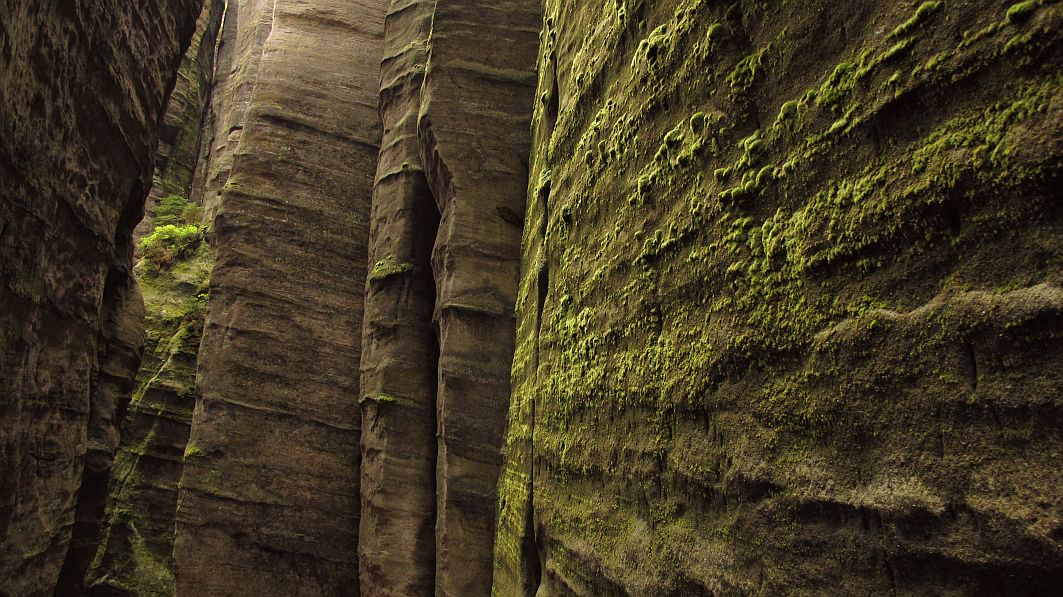 Adrspach and Teplice, the cities of rock. Wow, what a rock scenery. Huge sandstone walls rise above the forest. Round formated through erosion in different sizes and shapes. Moss covered slot canyons were you can hardly walk through. Impressiv rock needles, arches and small streams are running through the bizarr rock world. It´s magical. 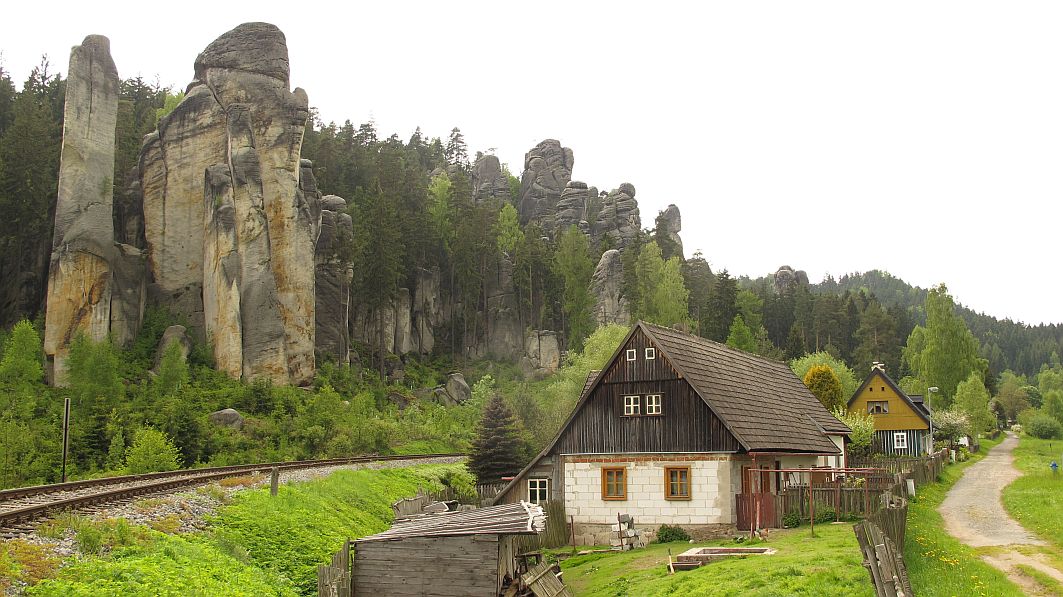 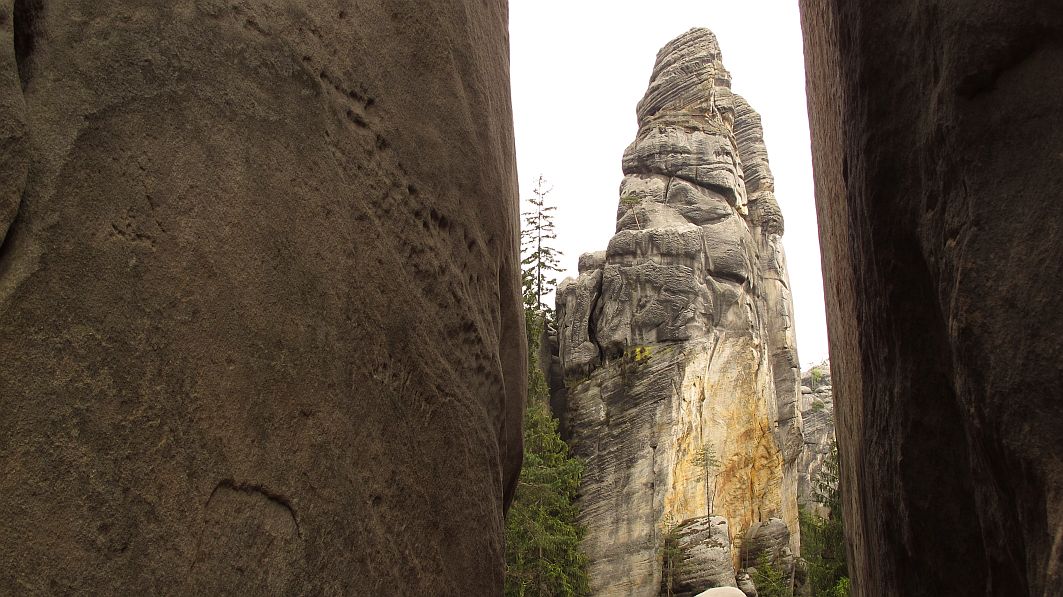 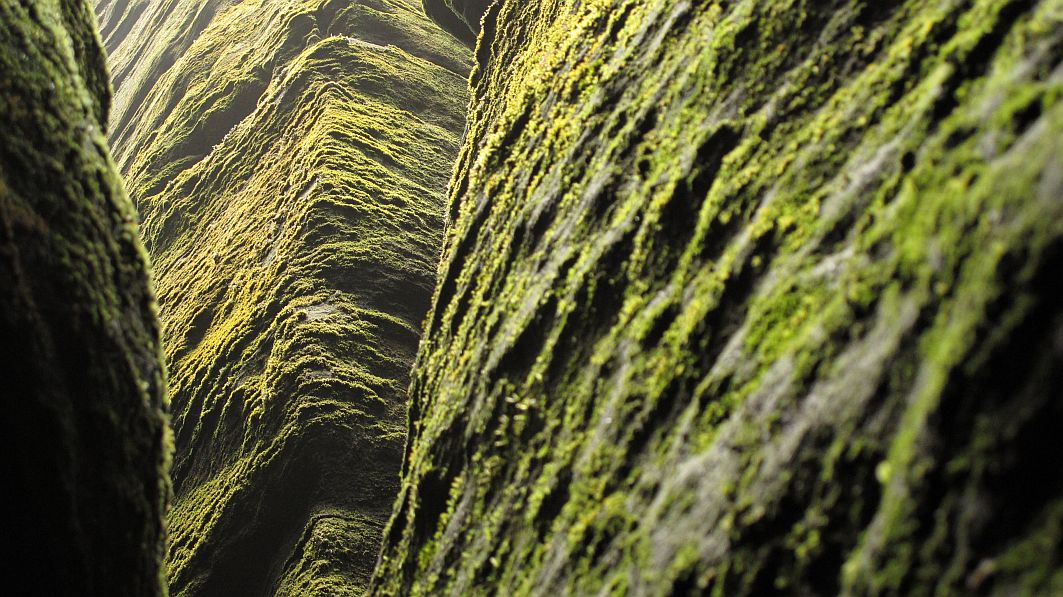 I stayed two nights in the rock world before I continued.
From now on it rained without stopping. It wasnt really a lot of fun anymore cycling through the rain all day. 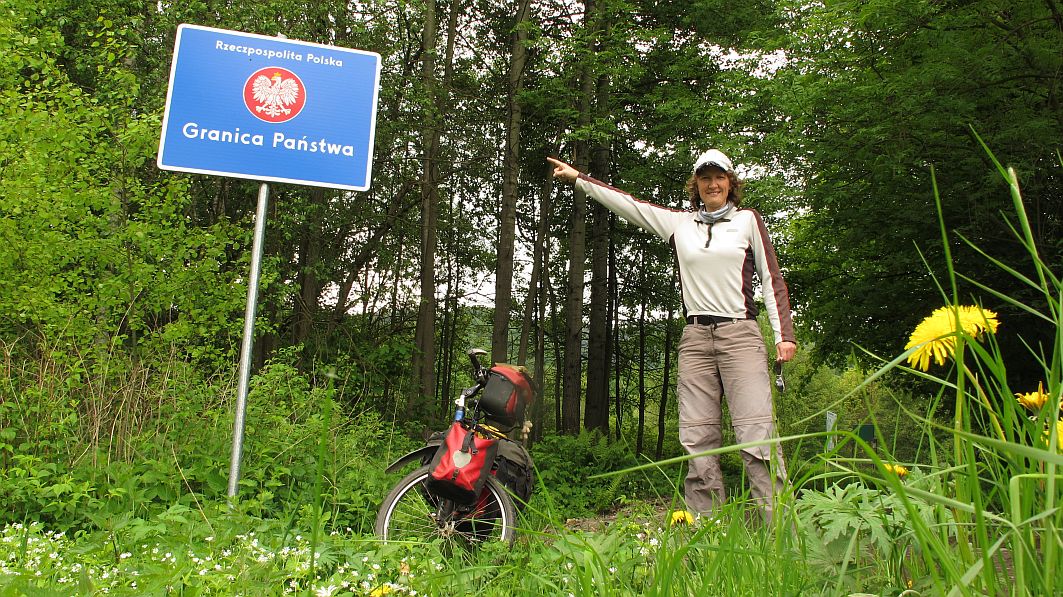 As I was crossing the border to Poland I was curious about differences. Obviously right from the beginning there were the inconsiderate drivers. Groceries and accomodation is more eypensive and the pavement is in much worse condition than it is in CZ. 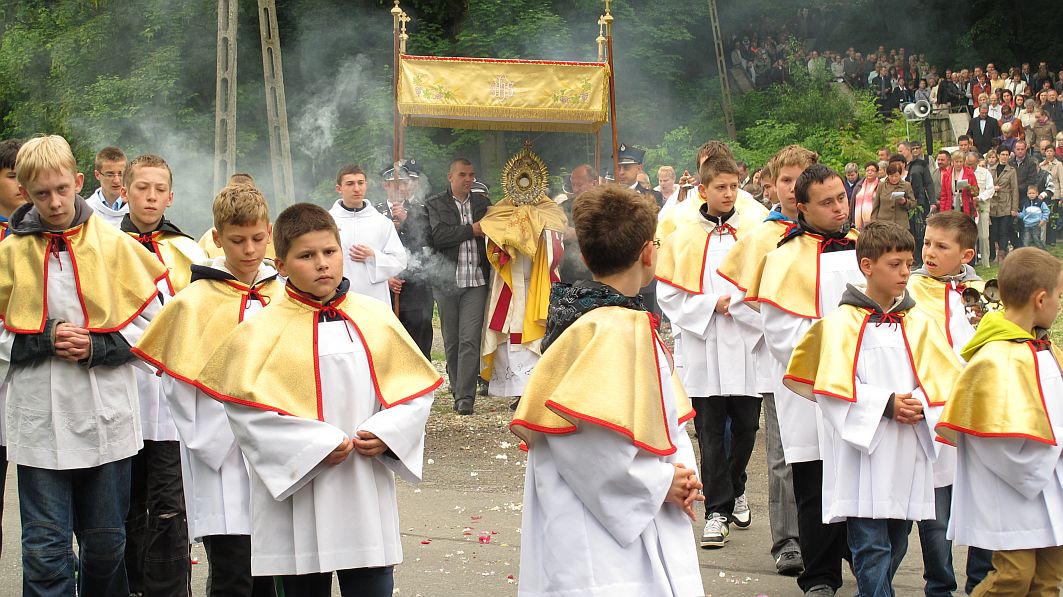 I started asking people at their home if it is possible to pitch my tent in their garden. And so far they never refused my question. One night they even invited me into there house, offered me supper, a shower and I could wash my clothes. On the other day they gave me breakfast and a big lunch box and even a bit of money.

I pedalled 100km in pouring rain to reach Auschwitz. It was worth it. The museum is absolutely worth seeing. It really takes you down to what happend there. It is unbelievable what kind of cruelty acts took place. I can only hope that there won’t be anybody able to carry out those mass destructions again. I would treat the museum equivalent to the Checkpoint Charlie in Berlin, the Egyptian museum in Kairo and the Natural History museum in London. I can really recommend it to everyone. I spent there all day and I am sure it will occupy me for a longer while.

← No.1 - Germany - The start of my bike ride around the world No.3 - Poland/ Bieszczadzki National Park →