Branding day at a ranch in Oregon 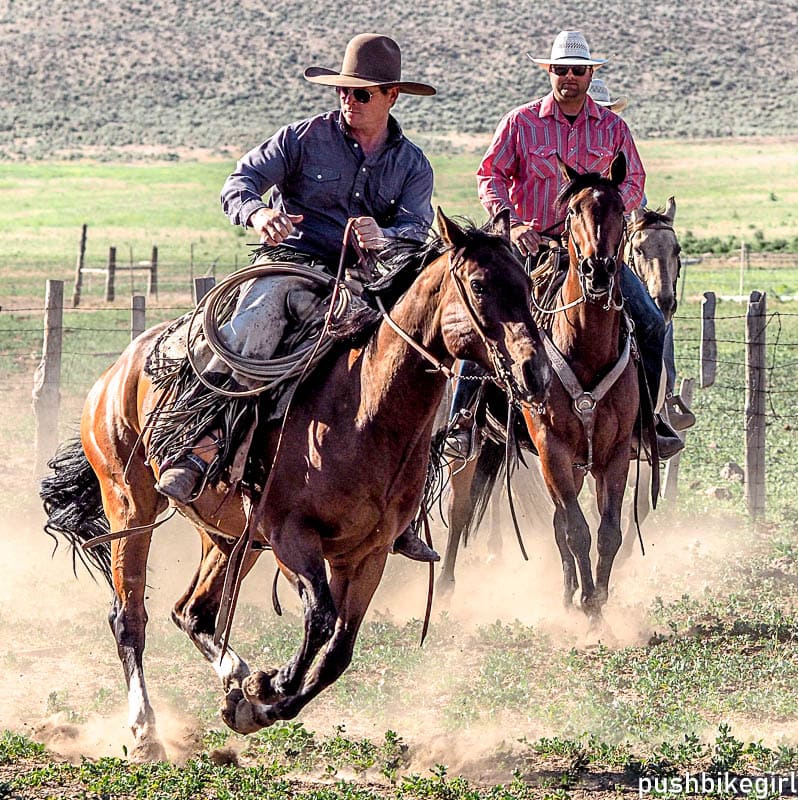 “What are you guys doing out here in this heat? I saw you two in Burns a few days ago. I was the woman who sent you in the wrong direction when you asked for the post office,” Mary said, while her husband Wes looked on anxiously at Butch, who was huddled under the trailer trying to survive the heat.

“Do you guys want to spend the night with us tonight? We have a farm not far from here; you can cool off there.”

“That sounds great, thank you very much,” I replied.

“Okay, we’ll have to get the trailer to load you up first, though. See you soon, we’ll be sure to find you, there’s no one else out here” Mary laughed, and Wes dusted us off properly as he drove off.

Quite some time passed, and the sun was already setting when Wes showed up with his trailer and picked us up.

As always, distances are relative. At first, I thought surely, they had some errands to run on the route, and that’s why it had taken so long, but far from it. “Close by” is a bit further away than we Germans would imagine.

So, it was dark long before we arrived at the farm, and I was a little worried about how Butch and I would get back to the road the next day.

“You must be hungry,” Mary asked and started to fry me a burger.

Butch had already said hello to his new playmates because, of course, the farm had some dogs. Wes also immediately asked: “Would you like to keep Butch? He would fit in very well here at the farm!”

“You won’t believe this, but I’ve had a few cowboys ask me that already,” I replied.

His smile was mischievous and kind of cute.

The house was full of cowboy paraphernalia. The antique stove was absolutely worth seeing.

Wes sat in his cowboy boots and a crushed cowboy hat in an armchair carved out of wood, holding a walking stick in his hands. He radiated infinite serenity and contentment. An old man who had been through a lot and was at rest, at least that’s how it came across to me.

The scene reminded me of Bonanza. (Wikipedia) My favorite TV series as a child (besides Pippi Longstocking, of course). Childhood memories and indeed childhood dreams, which slumbered in my mind all through my early years. The Wild West has always been special for me.

“Heike, tomorrow we have to get up early. We have a branding day, so we’re going to bed now” I heard Mary call, and I was immediately on fire.

“A branding? Can I maybe be there?” I asked hopefully.

“Of course. We’ll get up at six, and then all the cowboys will show up one by one,” Mary replied while she was still making the last preparations for the following morning and stacking all the bowls of food in the fridge.

As Butch and I crawled into our tent and I enjoyed the absolute silence for a bit, looking up at the stars and experiencing the balmy night, I was eager to see what the next day would bring. I was also grateful to have had such luck to be here for this event. Butch fell fast asleep while I lay trying to envision the next day.

When the first cowgirl showed up, an older woman, tomboyish, with a deep voice and full cowgirl outfit, we were standing in the kitchen.

As a photographer, those are the special moments. One voice in me says: Heike you have to get your camera out, these are the excellent pictures! The other voice speaks against it: Hey, let people arrive first, feel comfortable, and get used to you. Build up trust and instead take pictures later.

But by then, the situation is long gone, lost forever. It is an eternal weighing. How do I behave correctly? Should I keep these moments only in my memories or risk destroying them by pulling out my camera?

Most of the time, I wait, just like this morning. Those are the moments that stick in my mind best. I can still see her right in front of me. I had already mentally placed her in my viewfinder, centered her precisely with the background.

I knew which focal length I would have used and then let the chance pass. Too bad and yet all so right, after all. With my camera comes the responsibility to temper and follow my instincts as a photographer.

Cowboys and cowgirls arrived in short intervals. Some had left in the early morning hours to be there on time. They came from far away and had been on the road for many hours, bringing their horses in trailers.

Of course, I had no idea what exactly was going to happen now, and little Butch was at least as fidgety as I was. For sure, I knew what a brand was, but I had never seen for myself how exactly the cattle would be captured and how everything would be done.

While some of them were rounding up the cattle with the horses, I took the opportunity to talk to the other cowboys.

Not an easy job, at least that’s what it sounded like between the lines, and yet they all seemed ready to put their heart and soul into it. Some were friends or family members of Mary and Wes, while others freelancers working for a day’s wages, all brought together for branding day.

An unspoken system of exchange, and rotation. You help out at your neighbor’s one weekend, and in return, they help you out on your ranch. Right away, I had the impression this was also a social event, secluded on their ranches far away from each other; it’s nice to have a good reason to meet up and catch up.

Many had grown up ranching, experiencing cowboying from childhood; I was impressed by how professional everything looked. How very team-oriented everyone was in the matter. Each move worked, and I didn’t have the impression that there was a lot of talk or agreement needed; no, the team knew exactly what they had to do. It was as if they had been working together every day for years.

Heel & Head is the technique used in Oregon to catch cattle. From Australia, I know it is entirely different. Apparently also in Montana, another way is used to bring the cattle to the ground and then to be able to mark them with brands.

Heel & Head means one of two cowboys on horseback throws the lasso around the back feet while the other has to hit the head. Then both pull on the lassos, and the animal falls to the ground. A certain amount of tension on the ropes must be maintained so that no harm comes to the animal, nor can the animal run away again.

When the animal is in the correct position, two more cowboys hurry over and lie down on top of it to hold it better. Next, they untie both lassos, retying them, so all four heals, both front and rear, are secured, after which the cowboys on horseback again apply tension to the ropes.

Yet another team member then uses the branding iron hot and ready right out of the fire to burn the ranches unique brand onto the animal’s rump. No need to say the animal bellows in pain while the iron is applied.

While still secured on the ground, the cattle are injected with medication and vaccinations, a piece of the ear is cut off, and some are castrated.

Dogs didn’t have a role at all in the branding. By the way, Butch slept through most of the branding lying in the shade. I think it was too much excitement for him at once, also much too hot.

I found a statement made by one of the cowgirls very interesting: “Cattle ruin your life,” she laughed and told me how chained she is to the ranch but still loves her life.

After all, a rancher is never off work; they can’t leave the ranch alone, has constant worries about the cattle, the weather, and market prices. The ongoing drought in the region is a major concern for them.

As an outsider, I found it a bit funny how proudly the cowboys wear their belt buckles. They earn them by placing or winning events at rodeos mostly, and it seems like a cowboy or cowgirl would not be a real cowboy without such a giant belt buckle.

The day had been bullishly hot, well over 40 degrees or 104 Fahrenheit. The cowboys and cowgirls were not to be envied. What’s more, it all looked exhausting. The longer the day lasted, the more difficult it became to recognize which of the many animals had not yet had their turn.

It was late afternoon when the counting of the ear clippings marked the end of the branding day.

Traditionally, after the branding, everyone is eating together before heading the long way home. The following morning Mary and Wes followed another tradition by having the castrated testicles for breakfast – at least that’s what they had announced.

I needn’t have worried about how I would get back to the road; after the delicious branding feast, we were given a ride back to our route in a horse trailer – which was also once exciting 😉

As always, the morning hours are the times when the light is most atmospheric and therefore most suitable for photography. Unfortunately, you can’t photograph such events only when the sun has just risen, but you also have to accept that the light will get worse as the day goes on. Nevertheless, I tried to capture this for me exciting and eventful day as well as possible.

If you enjoyed this article please feel free to support us with pasta or some yummy bones to chew on.
As a thank you, you will receive a picture postcard from wherever we are at the moment.

Big thank you for your contribution 🙂