My cycling trip from Sweden to South Africa was my first major one. But this trip wasn’t focused on interesting choices of roads and scenery. The most important thing was to reach my main goal – Cape Town.

By not giving up and overcoming mentally difficult obstacles, sometimes suffering mentally as well as physically, you become stronger, appreciate life more and complain a lot less you become humble. This trip was more of a mental journey for me. 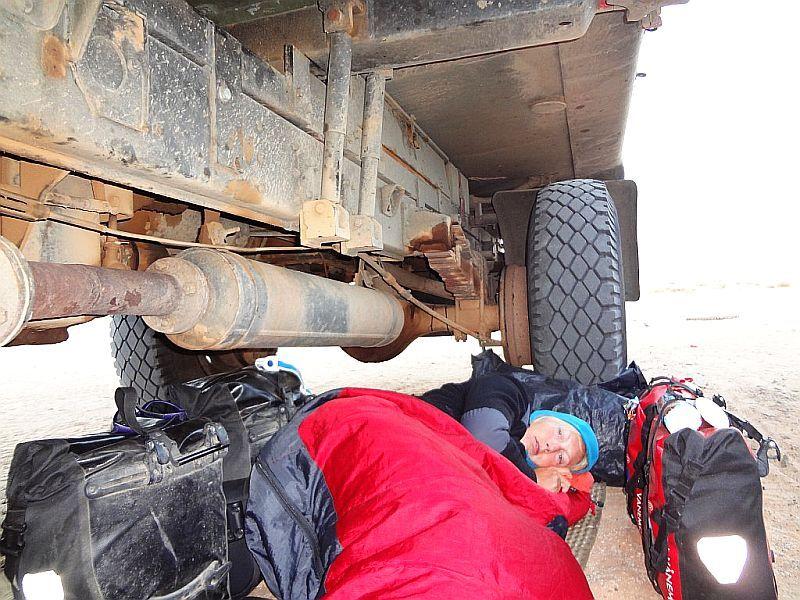 — Mauritania — too lazy to pitch my tent —

1. You crossed many borders. Which border crossing was the one you were most afraid of?

I was never afraid. I like to train myself to be prepared for the unprepared, which is a lifelong never ending exercise. I have this laid back attitude about death. We’re all going to die someday.

I don’t wish for a long life and I have no ambitions about starting a family. My goal is to have no emotional or physical dependence. That´s rule no.1 to remain unbreakable. Now I probably sound like a cold person with no soul, but I’m really not. I’m quite stubborn though and don’t like to lose control. So I never became frightened because it takes a whole lot more than bribes and sexual harassment to get my adrenaline pumping. 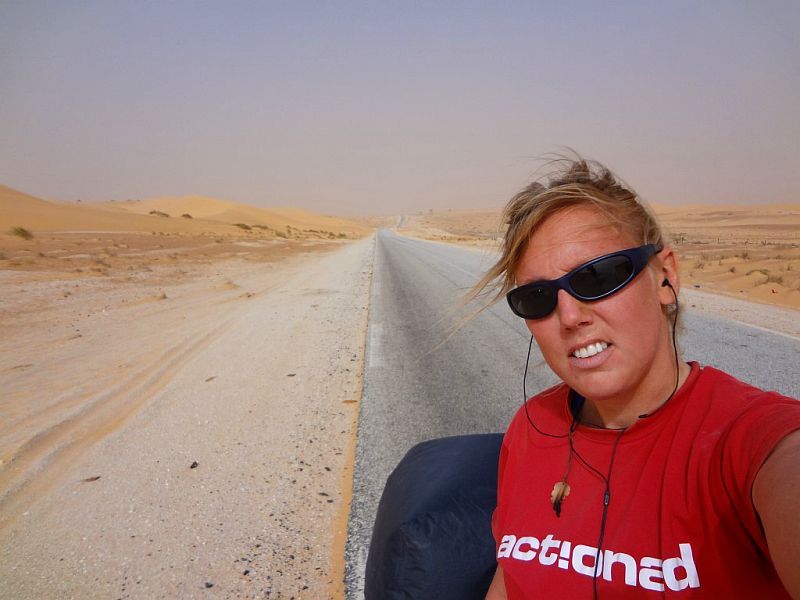 2. Have you had any special wildlife encounters?

Plenty! But not necessarily the way you expect. Throughout Europe I woke up loads of times with snails and earwigs invading my tent. In West Sahara giant, alien-like beetles joined me. Every now and then I was lucky to see animals other than insects. In Mauritania I spotted (what I think was) wild camels and donkeys.

Monkeys usually make me laugh, but sometimes they cross the line and they can be a big pain in the ass. One time, when I was camping in Senegal, I caught a monkey stealing my fruit.

In the Tropics, I dealt with spiders, huge snails, moths, mosquitos and flying ants. I didn’t spot anything but monkeys until Namibia. One morning, when I was camping in a Nature Reserve, I spotted a herd of zebras; that was magic! The warthogs were funny. When they noticed you, they stopped for a second staring at you, and then they started running like it was a matter of life or death. 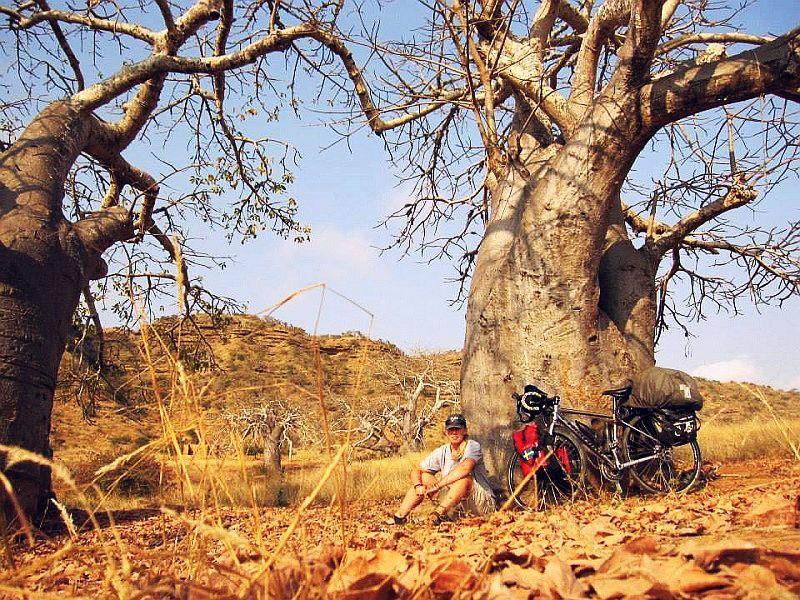 3. Where did you spend your nights most of the time? Did it differ from country to country?

I always did bush camping, unless the circumstances made it impossible. I don’t like to go through cities on my bike unless I have to, because the traffic is too horrible. But when I did, I stayed at cheap hotels, guest houses, or Couch surfers. 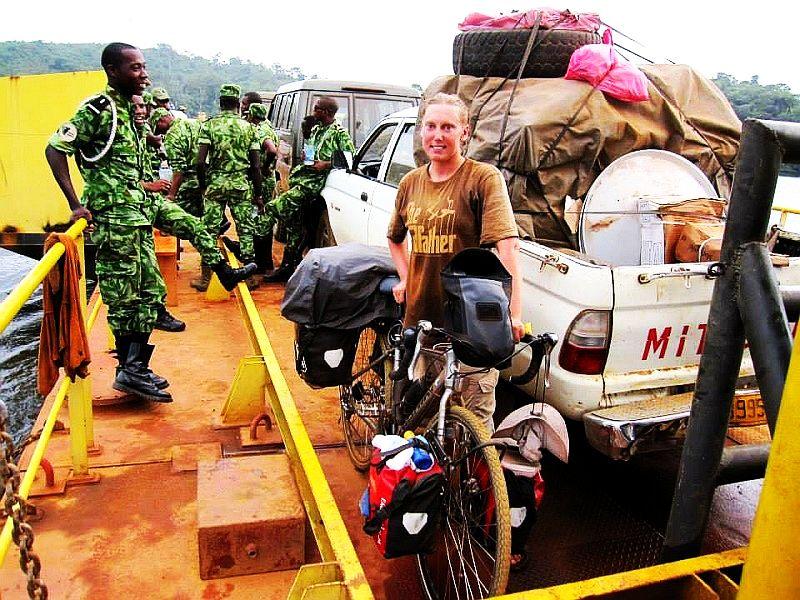 — Gabon, I’m on my way to Mayumba, the peninsula where I got lost on my way towards Congo —

4. Were you confronted with any corruption?  What did you do?

I think as a solo female cyclist, you are spared from a lot of corruptions. I didn’t end up in those kinds of situations very often. Every now and then officers and others in authority asked for money. This could happen on borders or at check points. But I always said no. As you go, you get more experience and you get better with dealing with these types of situations. You learn how to act. You make sure that you don’t show any hesitation. You make them believe that you know the rules and laws and since you most often don’t, you pretend that you do. You give them a lecture about ethics and morality; that always worked for me!

Nigeria was the least pleasant country I would say. There were a ridiculous amount of check points. There were also gangs (groups of men) dressed in red vests with bats. They claimed to be customs officers and if you didn’t pay, they start beating your car (they never harassed me though). 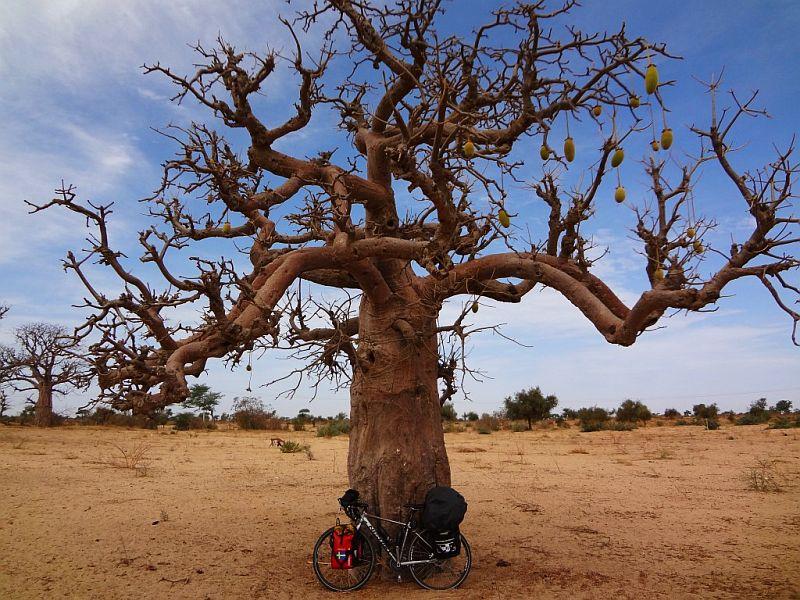 5. Did you have any bad experiences?

About 5 weeks while traveling through Europe, it rained continuously. Today, I can’t understand how I could deal with that. I, my tent and my equipment were constantly wet. But I kept thinking that everything happened for a reason. Deep inside, I was miserable and cold but I remained positive because otherwise I would have broken down.

I was hit a few times. The traffic along the Ivory Coast, Ghana, Togo, Benin and Nigeria were absolutely madness. But strangely enough, I didn’t get hurt.

In Liberia I got mosquito bites on my backside which became extremely infected. When the pain was unbearable, I had to make a cut, pick out a ball of thick body fluid and then press out the ooze. I had fever for about 1 month, so I stayed in Lagos, Nigeria, until I got better. I had no problems with men. I got loads of proposals though (laughing). 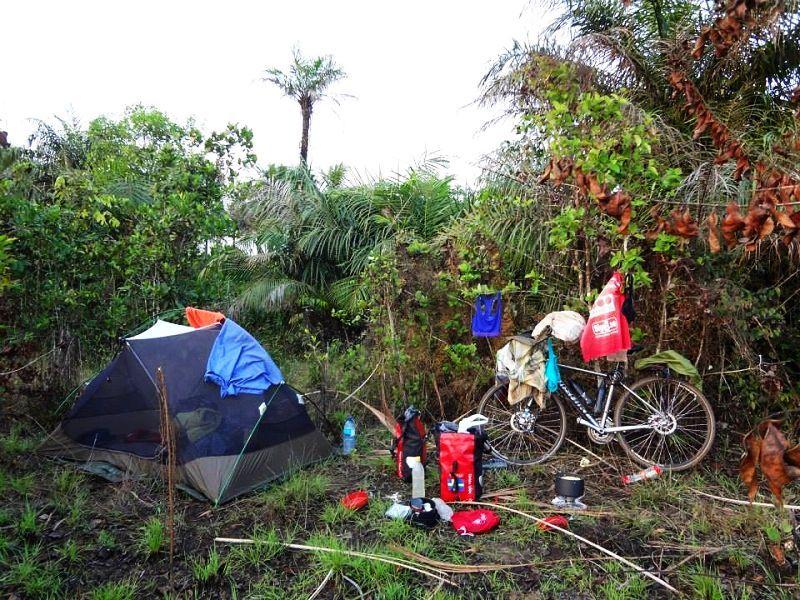 — Guinea-Bissau —- Camping in the jungle —

6. Was there an invitation to a meal where you thought, I am going to die if I eat this?

To not to be rude, I once ate snails. Not those “French-petit-all delicious-snails”. I’m talking about massive ones. That was in north Liberia, when I stayed in a village. In South Africa I ate a sheep’s eye. That was absolutely disgusting. I’m not planning on doing it ever again. The texture was chewy, so chewy that I thought for a moment that it would never leave my mouth. 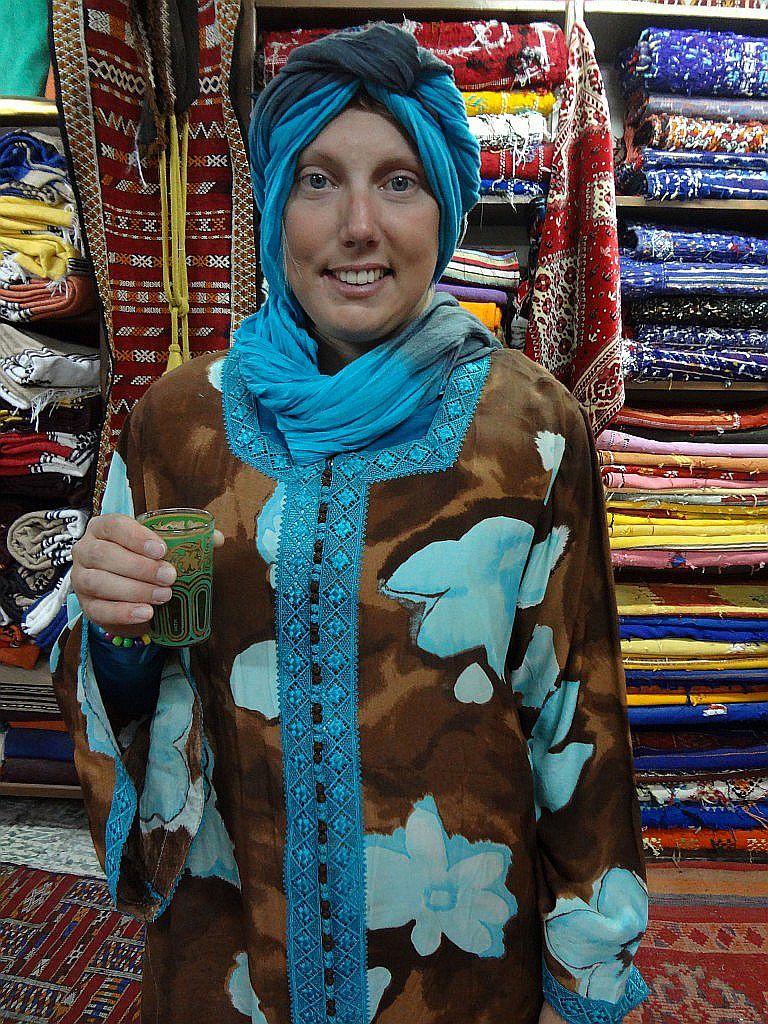 —  Trying some Moroccan fashion in Tangier —

7. How were the kids on the road in Africa?

Oh the kids! The kids in Morocco were the worst. The food and the scenery where awesome and I hope to return one day, but as a female solo cyclist, it was not very pleasant at times. Kids were throwing rocks at me, laughing like I was prey that was spotted by a gang of psychopaths, like they were fearless with no empathy.

Sometimes kids followed me on their bikes, trying to grab my stuff and harassing me. You should also be aware of the kids on the side of the roads trying to sell stuff to you (the nomads). They can be really aggressive. But I learned not to show any fear. The most successful way is to stop and run after them and scare them. They don’t expect that. However, the kids where only aggressive when there were no adults nearby, except for the nomad kids.

Other than that, I had no trouble. As I was passing by, the kids (and those growing up) were cheering at me and asking for money, or I should say that most of the time they were demanding money. 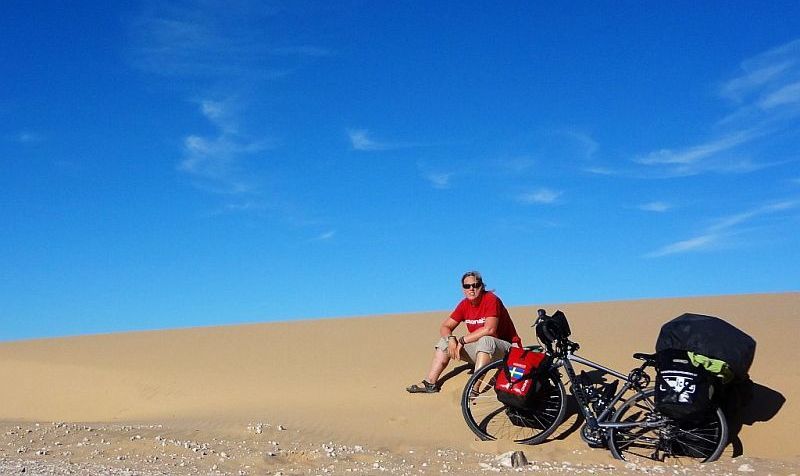 Africa is absolutely amazing. I strongly recommend it. The continent is so big that you pass through different climate zones and each has its charm. In Northwest Africa, you have The Sahara desert. Throughout West Sahara I had tailwinds, but that quickly changed when I reached Mauritania.

The headwinds where strong and the air was colored beige – a bit absurd and weird, but totally cool.
The Tropics were humid, insanely hot and I and my clothes were constantly moist and wet. The humidity drove me crazy! The thunder storms and cascade rain were outrageous and the mosquitos and flying ants didn’t make it easier.

But when I reached Southern Africa, it all got better again. It was dry. I could finally make fire in the evenings, fall asleep under the stars and not worry about weird flies nesting on my gear. 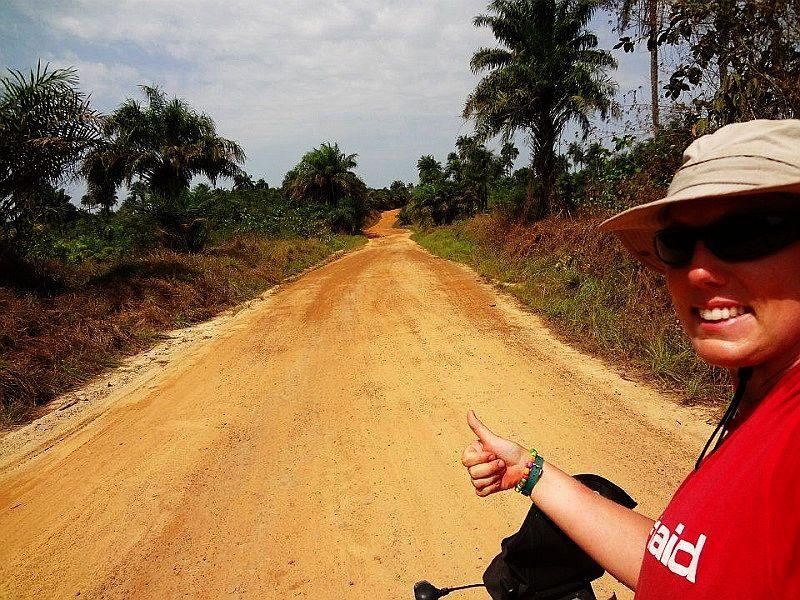 9. Which were the five most thrilling roads? 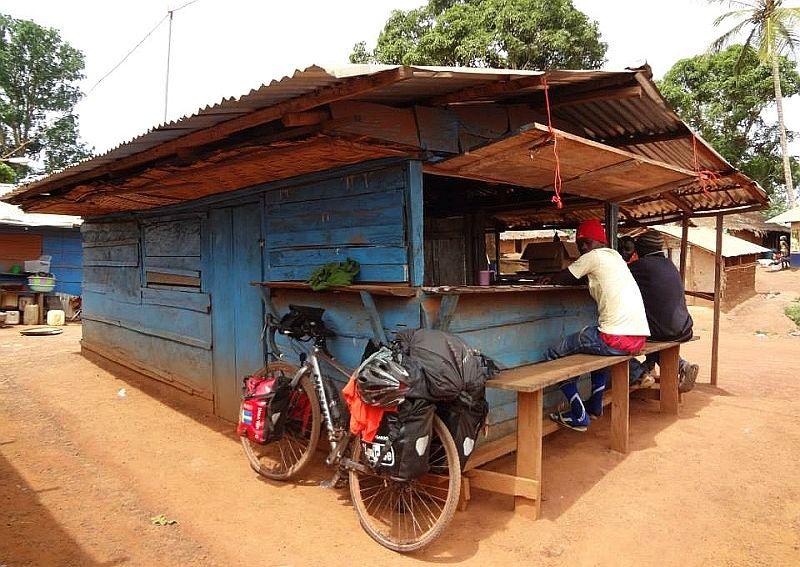 Liberia — This is a typical café where you can order instant coffee with condensed milk, awesome!

10. When you finally arrived in Cape Town, how did you feel at that special moment?

I was relieved. I laid my bike on the ground and I started to cry. I had dreamed about this day for so long. It felt unreal. Now I know what I can do and that feels great. On my next trip I’m not going to stress myself. I will go a lot slower and take much more interesting roads and enjoy every day. 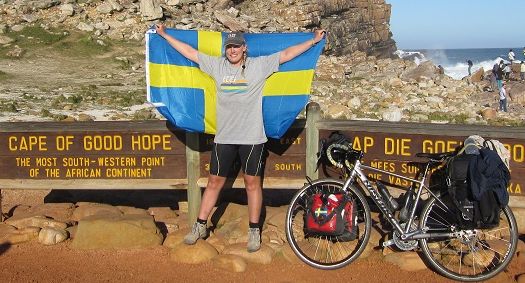 —- South Africa, my final destination, at the Cape of Good Hopes —-

11. Do you have any advice for other solo female cyclists, who would like to cross Africa, but who are still not sure if it is safe to go?

My advice is to not listen to what the news says. I didn’t even bother about what the Ministry of Foreign Affairs or the embassies said, because, if I had done that I wouldn’t have been able to go anywhere.

Even if there are conflicts, it doesn’t mean that the whole country is infected. I didn’t look up anything, because if I was allowed to enter the borders, I did. I had the most amazing time ever.

The people were friendly. I had no difficulty finding water or food. If I had wanted to, I could have slept in the villages, because the people were all very keen to make sure I was safe. The hospitality throughout Africa was incredible. I will definitely go back someday.

Read more about this fascinating lady on Emmas blog theskippingkangaroo