Dorothee was born in Germany on a wonderful day in November.

She cycled through 60 countries so far, estimating the total distance to be over 150.000km.

I started cycling when I was about 5 years old. I did my first cycling tour at 15. Until 2008 I did one or two longer trips every year, and then I quit my job. Since then I have been more or less on my bike and cycled twice around the world. The 1st time took 2 years and 5 months, the 2nd time 2 years and 3 months. Of course I like cycling, the physical exercise. But this is only a minor reason why I am touring. The bike is just the best vehicle to allow me to fulfill all my other interests, the freedom you have on a bike, getting to the best places in the world, meeting people… 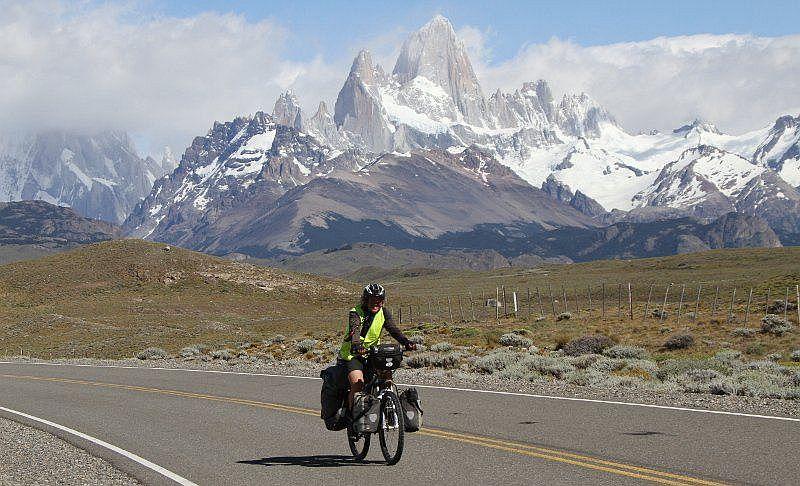 1.  In both round the world cycle trips you headed East. The trips are very similar. Which variation was more interesting and which trip excited you more? You left Africa and the Middle East completely aside. Are there reasons for it?

I don’t prioritize countries, people, trips .. I don’t think one is better or more fascinating than another.

They are all different and in their own way special. On my first round the world trip I cycled through Russia and Mongolia where I met fantastic people and came through beautiful landscapes. The same as on the 2nd trip through the Stans.  I had originally planned to do the Silk Road first, but got discouraged by all the visa issues I read in other travel reports. The visas for Russia and Mongolia were much easier to get.  With all the experiences I had on that first trip I knew I could handle the issues along the Silk Road. And in the end it was much easier than everybody said.

The first plan for the second round the world trip was to stay in the Northern Hemisphere and to cycle from China through Russia and cross the Bering straits to Alaska. Luckily I got an invitation by friends in Australia, a good excuse to avoid the cold winter in Russia. My friends in Australia were one reason to go back, the other was the little bit I haven’t cycled so far, Cape York.

Like Australia I also went to China and Chile again, but in all these countries I cycled new places I hadn’t been before. I had already cycled in Israel and Jordan. I didn’t feel like cycling alone through Iran and Irak, maybe when I am older.

Africa is on top of my list for the next longer trip. It would have been too much to add it to the round the world trips. You should also have time to digest all the experiences before you have new ones. 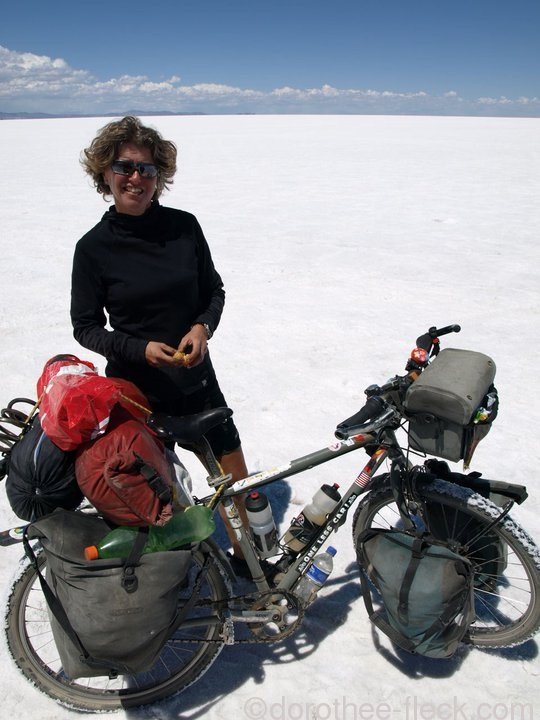 2. What was the most difficult part of all your trips that might have pushed you to the limits?

To end a trip and to go back to Germany.

3. Have you been scared sometimes? Was the second trip easier?

Of course I am scared sometimes.

And that’s good, it prevents me from doing stupid things. But if the fear restricts my freedom I try to do something against it. I learn, make experiences, start small. On my second round the world trip I did a lot more free camping. I can now know better if a place is safe or not. The same with long lonely dirt roads. I have enough experiences and always survived to say I can do it. 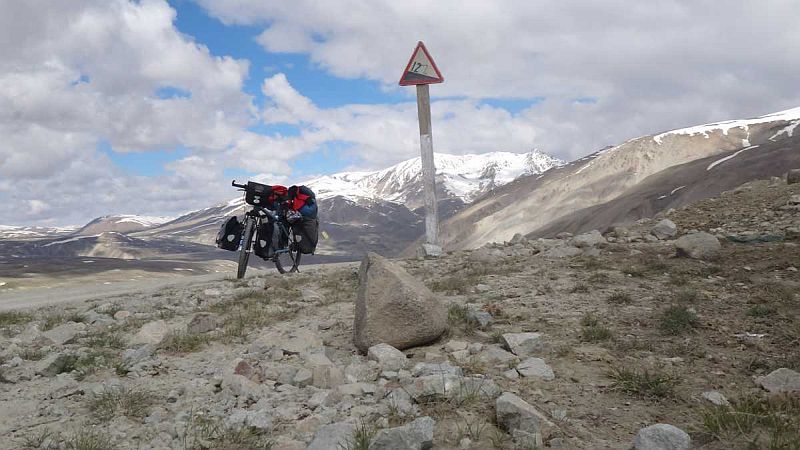 4.  World wide which were the five most stunning scenic stretches of road? 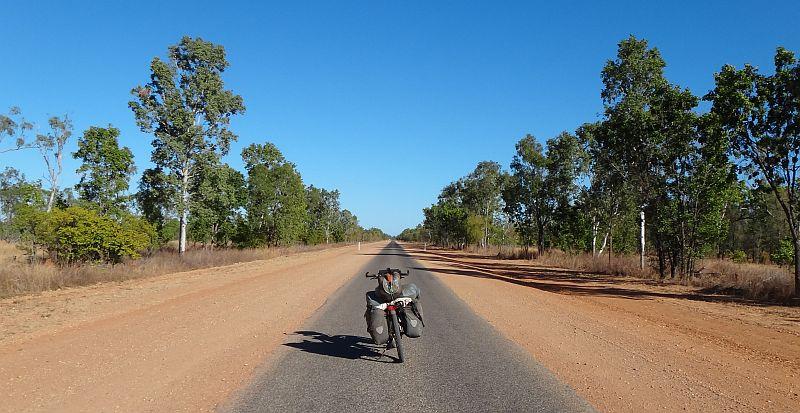 5. I guess you encountered a lot of help in whatever way. Which one was the most important or that affected you the most?

Yes, in very remote areas there were a lot of car drivers who gave me fresh water or something to eat, or in other places they offered me a bed even if they only had one room in their house.

Once, on the highway through the Taklamakan desert, I had a flat tire. Normally not a problem at all. I changed the inner tube, but then I realized my pump didn’t work anymore, too much rain and sand. No car stopped, there were not many anyway. Then a little old motorcycle came and stopped. We were wondering how he could help me. The only possibility was that he took the wheel to the next garage, pumped it up and come back.

Thought and done. I saw him riding away with my back wheel, my Rohloff hub included and left me wondering if I ever will see him and my wheel again. He had to ride I don’t know how many kilometers back and forth. After waiting for around an hour in the desert he came back with the tire pumped up. Instead of accepting some money or something else he offered some bread. 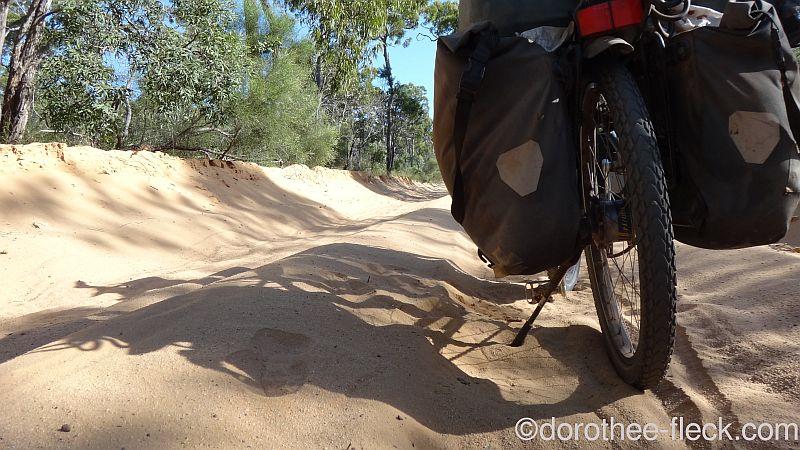 6. Every cyclist knows those endless most boring roads where you torment yourself and where you have doubts about what you are doing. Where have you encountered roads like this and how did you manage to make it to the end?

Actually all stretches with head winds seem endless and boring, especially on long plains through deserts. Lucky me, I am a little bit older and don’t have to prove nothing to anybody anymore. It doesn’t make sense to fight against the wind, you will always lose. If I have had enough I stop earlier if possible, or I also can accept help if a car driver stops and offer me a lift. You shouldn’t stay in your own light. 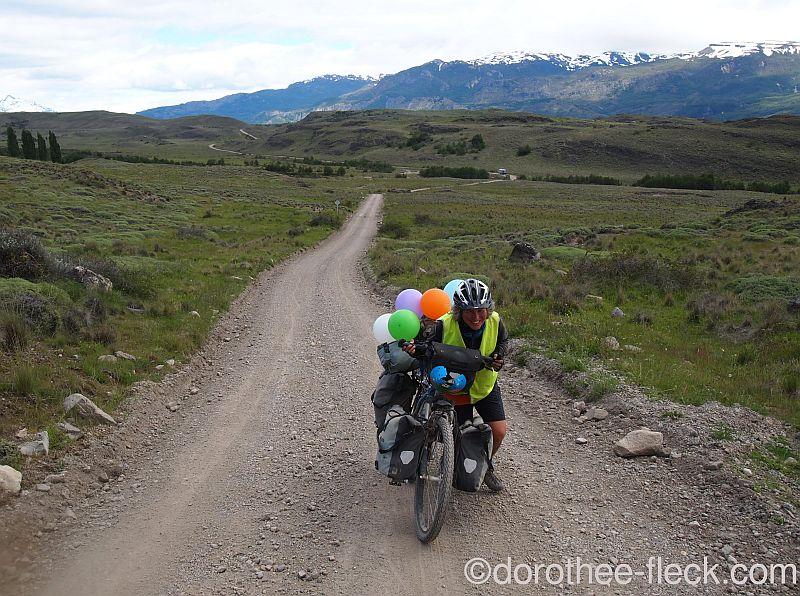 7. What type of cyclist are you? The person who plans in the morning where to sleep at night? Or do you just allow everything to a coincidence? Do you cook yourself? Do you pitch your tent most of the time or do you stay with locals in private houses or in hotels? Briefly how does a normal, preferable day of cycling look like for you?

I love the freedom on bike tours. That also means I want to have the freedom to cycle as long as I want, to sleep wherever I want etc. Only when I have an invitation I know in the morning where I want to get to. So, my perfect day looks like this:

I wake up in my tent, it’s already daylight and the sun is still behind the horizon.  It’s far away from any civilization. I make my coffee and have breakfast while watching the sun rise.  Then I pack everything and take off.  It shouldn’t get warmer than 35 C but also not colder than 20 C. Then I cycle as long as I want, with breaks of course, maybe I will pass a little shop where I can buy food and get water. When the sun sets I want to have my tent built up and have my dinner in the last sun rays. Sounds romantic doesn’t it? But this is like eating cakes and chocolate every day. After two or three days I want to have a change. I want somebody to talk to, see something else than the road. 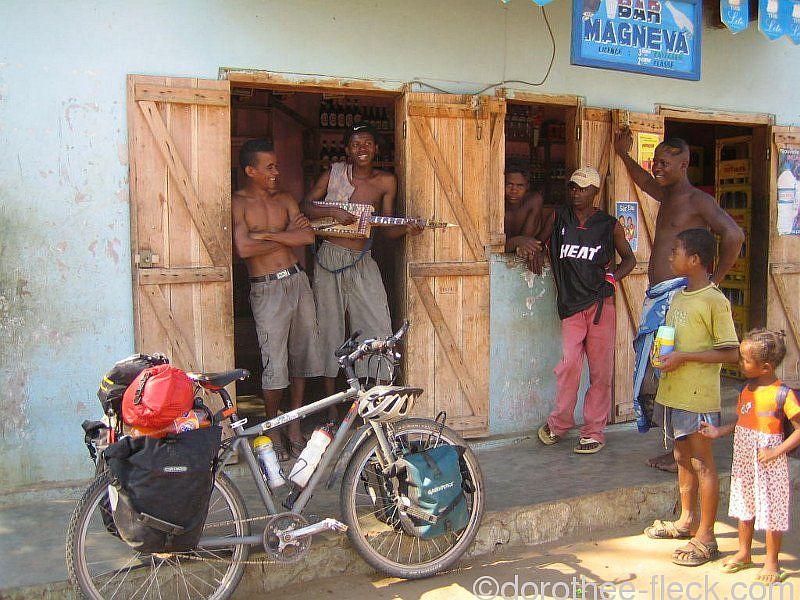 Yes, of course, otherwise, in my opinion, I would be doing something wrong. 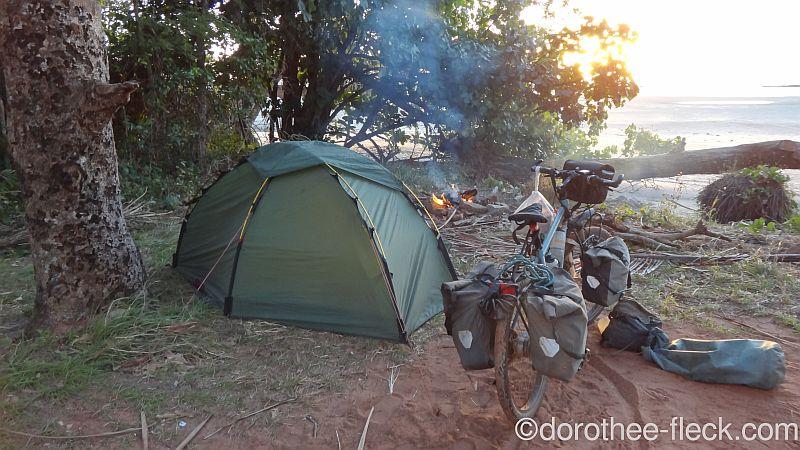 9. What have you optimized on your gear, given the knowledge of the first around the world trip?

Actually not very much. I already had a lot of experience before my first round the world tour and very good equipment and bicycle. I only changed my tent. At first I had a Hilleberg Akto, it was fantastic, but it was not a free standing one. For the second world trip I got a Hilleberg Soulo.  Hopefully I will have this tent forever. It’s just perfect. 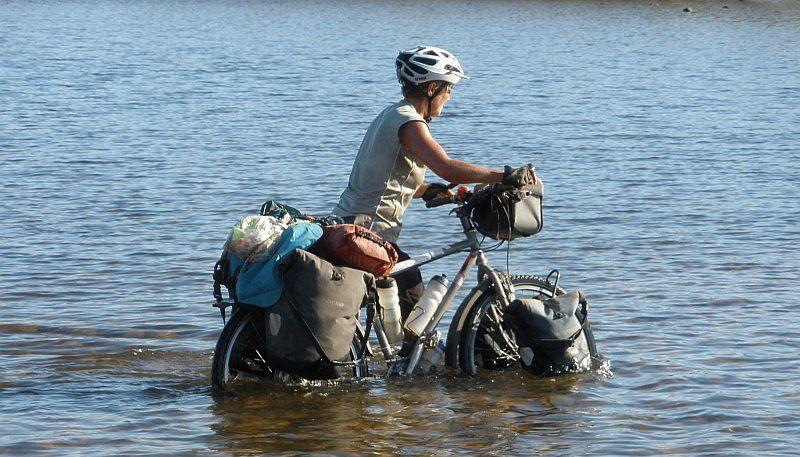 10.  Which country surprised you the most?

I think Uruguay. In fact I didn’t know anything about this country, only about their past during the military regime and dictatorship. Besides that it is the most expensive country in South America I felt immediately in love with it. It’s so quiet, no traffic at all.

There are almost no Uruguayans left and those who are still there are really laid back. And there is a lot going on about cycling culture touring. 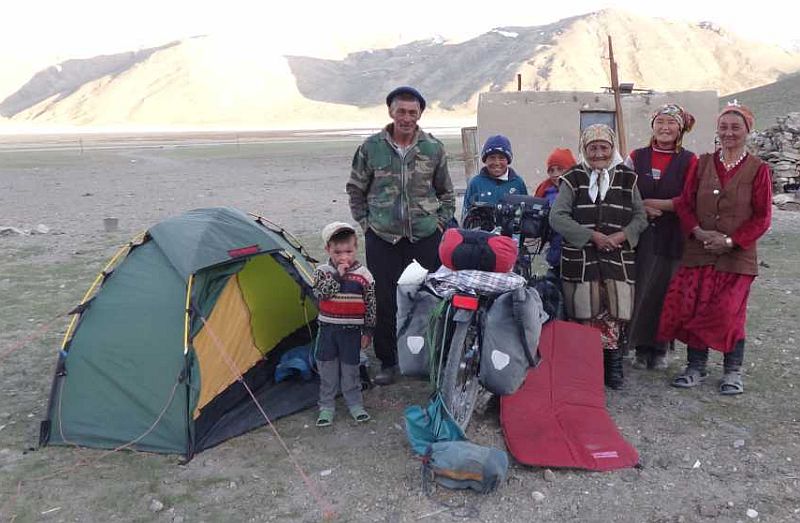 11.  Please tell us about a situation from your life on the road which has had a long lasting effect on you?

Once I was cycling the Pamir Highway and I got invited by a family who lived isolated high up in the mountains. As usual, it was the girls business to go in the evening and milk the cows. They asked me, if I want to come with. I had to tell them I cannot milk a cow. They were surprised and asked me what I do if I want to have milk.

I said I go in a shop and buy one. For somebody who lives about 100km away from the nearest shop it must sound very strange. I can do a lot of things but not even milk a cow let alone to survive in an environment like theirs. And we think we are superior and have to teach them. I think we should go there and learn all the skills our civilization has already lost. 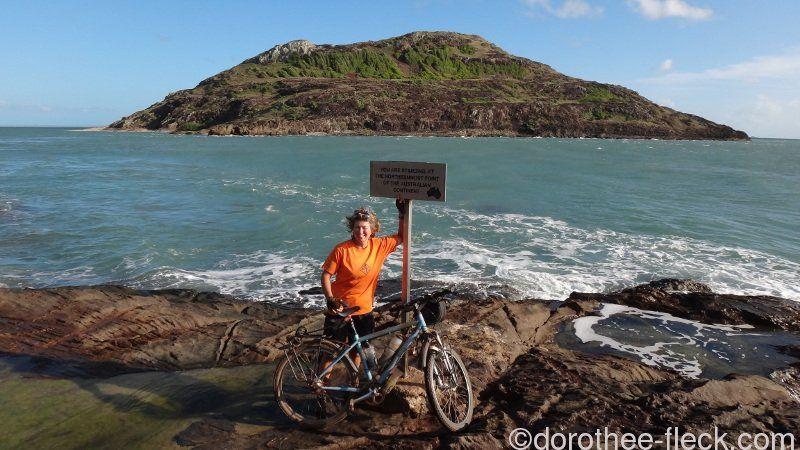