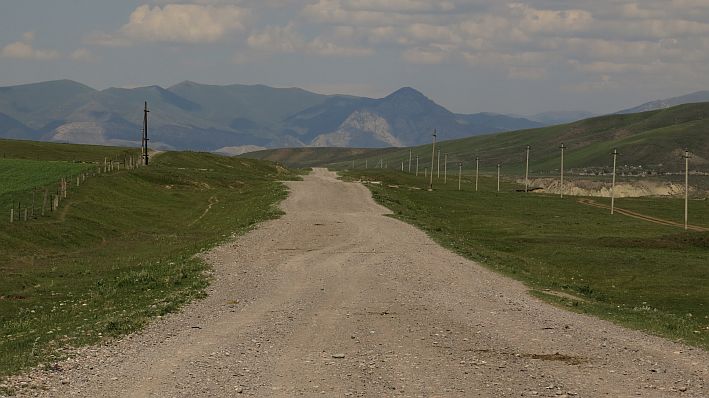 My first impression of Kazakhstan materialized in the driving habits of the people; I encountered a much more pleasant driving style there. Suddenly, the drivers were far more cautious; they passed me at a distance and honked only if they wanted to warn me.

Immediately, I was greeted in shops again, something that I waited for seven weeks in vain in Kyrgyzstan. In Kyrgyzstan I was always the first to greet the people I met, but they never returned my greeting.

In the first village, I took a break and ordered some food. I could have done handsprings for joy, because there was a wok and the cook magically conjured up a delicious Chinese rice dish for me.

Superb! I had missed good food for a couple of months and for that reason, I was really looking forward to China. 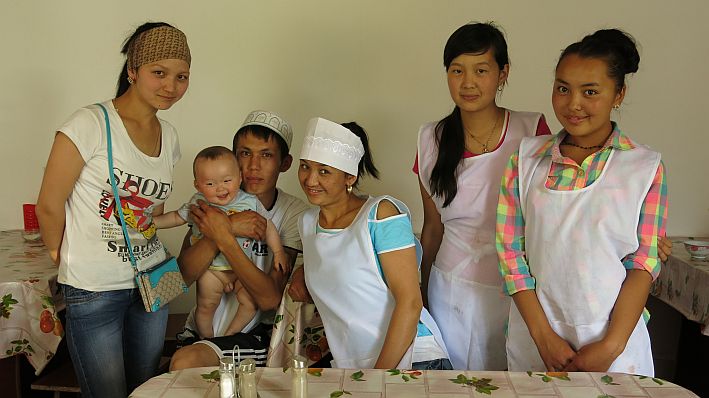 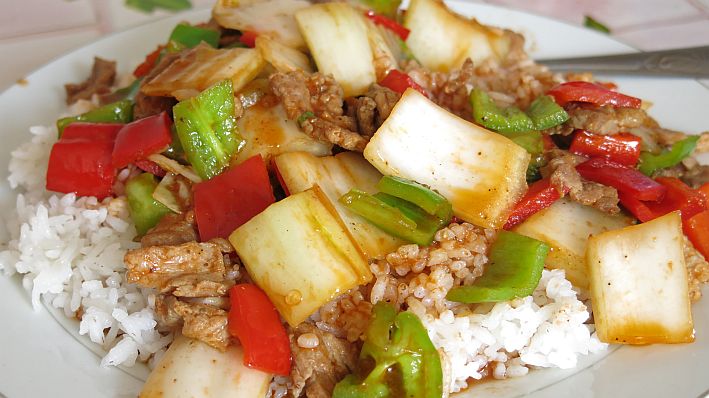 Unfortunately, I would need to register with the police within 5 days in Almaty in order to be able to stay longer in the country, but the 500-kilometer detour would not have been worth it to me, so I decided to take the direct route to China.

Reportedly, there are large monetary penalties if one doesn’t register in time.

However, if I were to leave the country again within 5 days, the registration requirement would be dropped. 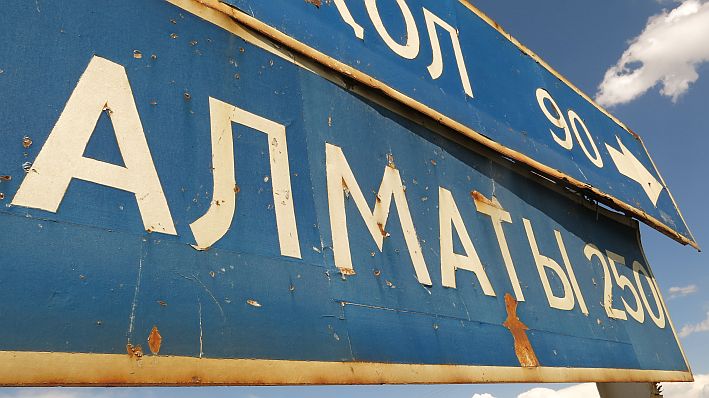 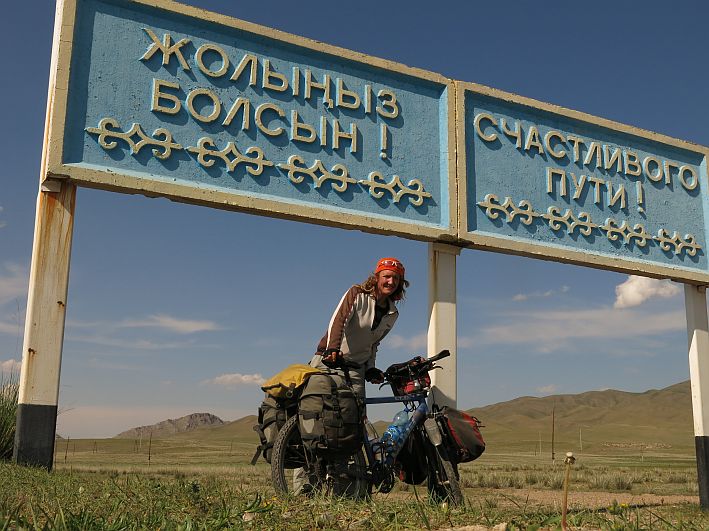 Always during the first day when I’m in a foreign country, I try carefully to get a sense of what the people are like. While looking for a place to pitch a tent in a village, I introduced myself to some people and set up my tent on the village meadow.

A lady invited me into her home and gave me some food and tea. She wanted to convince me to sleep in her house, but I didn’t want to do that.

It had become really hot, so it was just too stuffy to sleep inside. 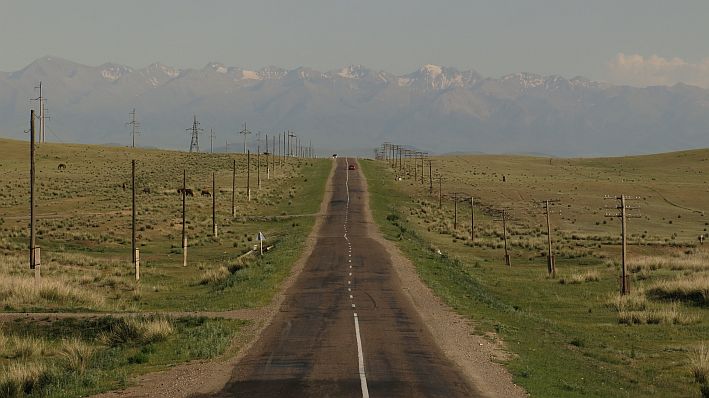 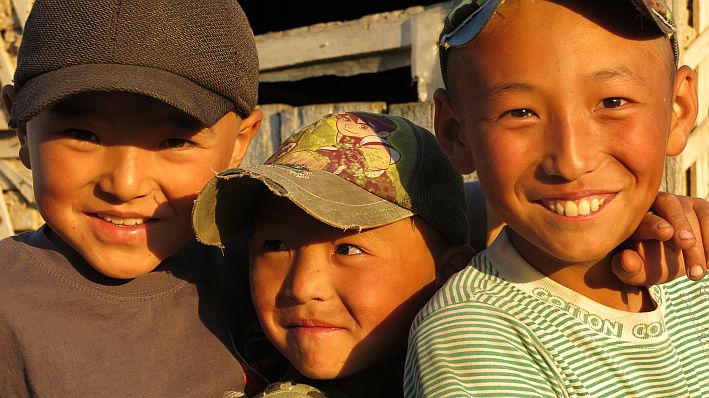 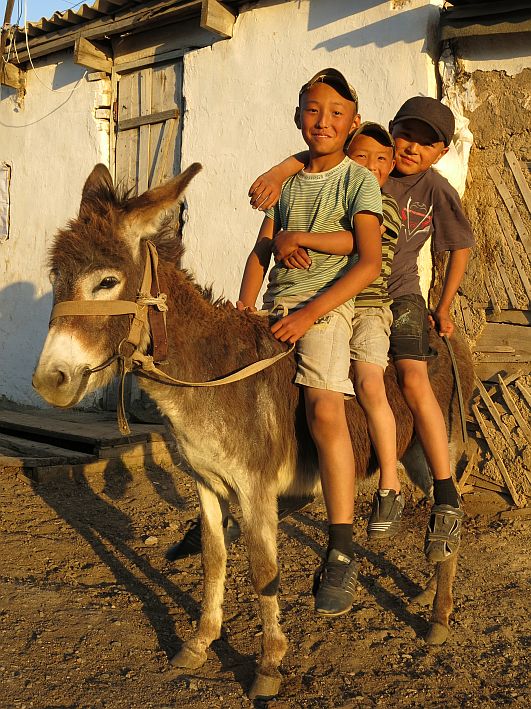 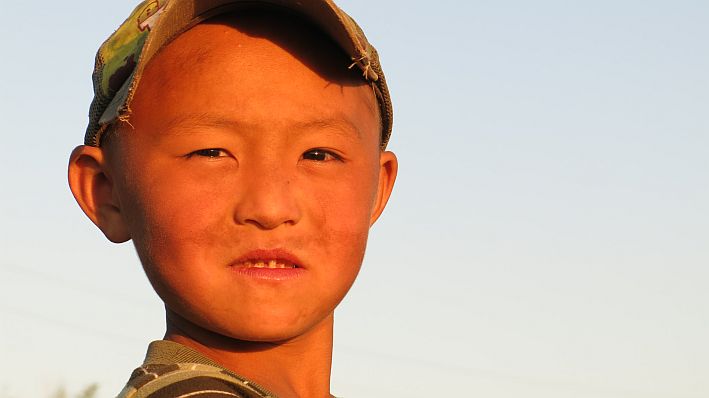 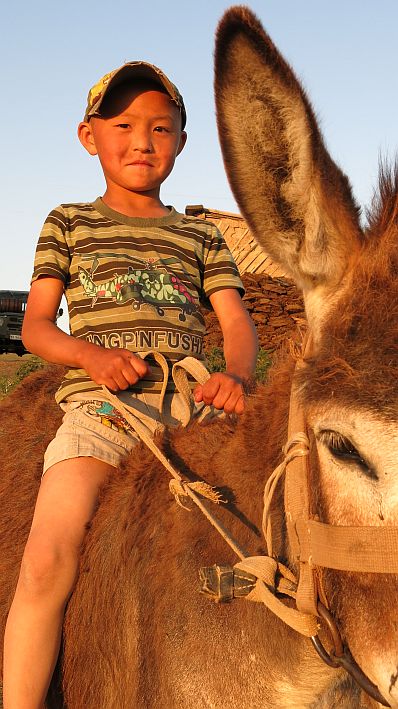 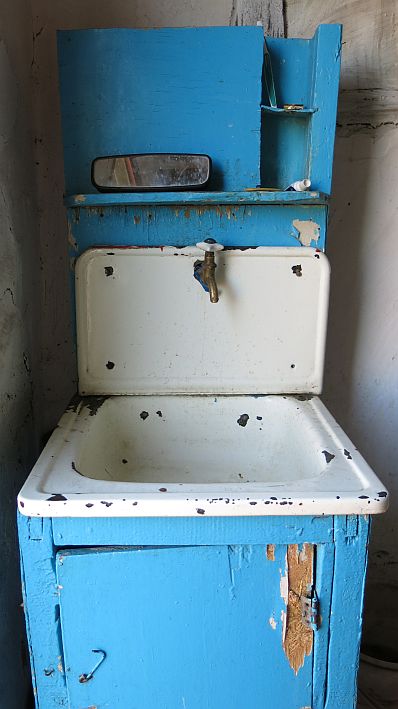 The people here live from the cattle industry.
They produce cheese, butter, cream, kymus and milk and sell it in Almaty. 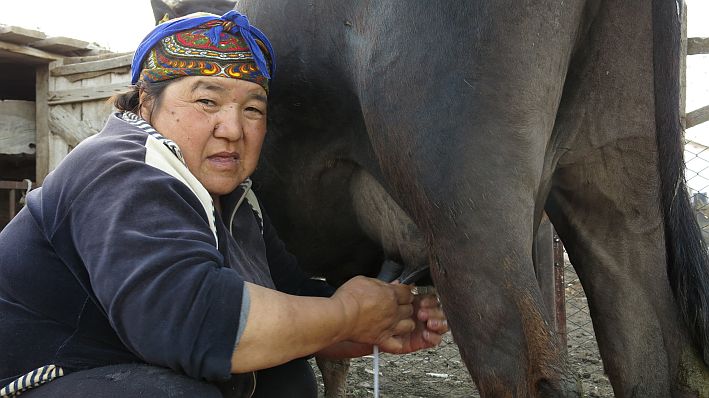 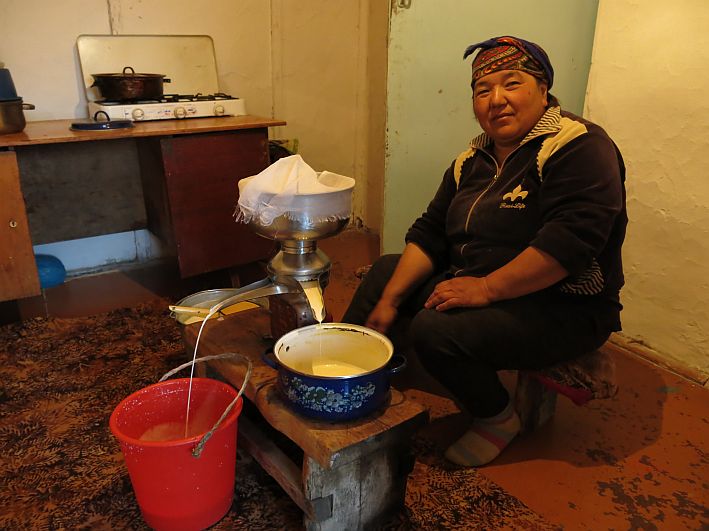 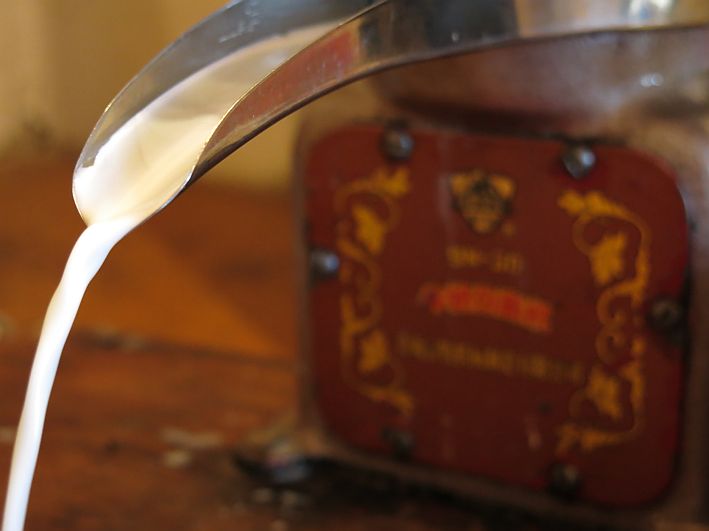 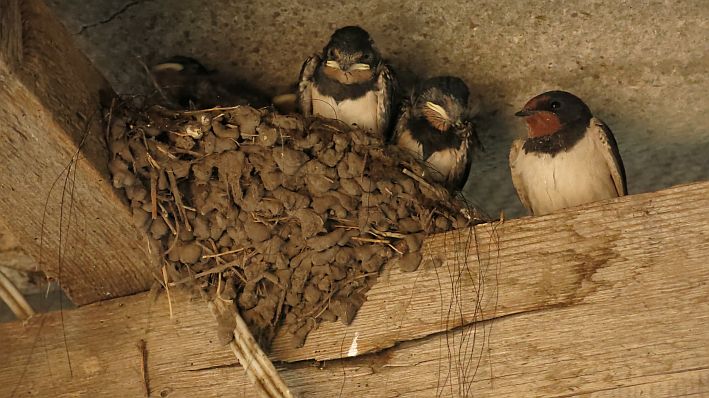 Ramadan had already begun. From 3:30 am to 20:45 at night, there was no food and people were especially not allowed to drink anything.

I really wonder what the benefit of that is supposed to be. The daughter of the house was not feeling well and she looked continuously at the clock – no wonder, with all that heat and no fluids.

Not all the people held to the long fasting period, and for many, Ramadan seemed to have no meaning.

The last time I experienced Ramadan was in Macedonia, it’s crazy that I’ve been underway so long. 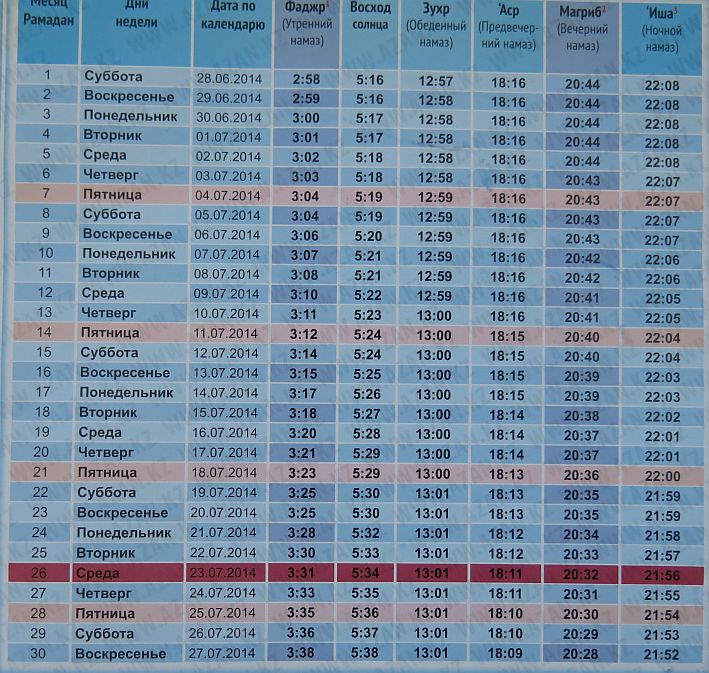 Islam in Central Asia doesn’t have nearly the value it had in the other Muslim countries I visited previously. One hears the muezzin call frequently, but the whole time I spent in Central Asia,
I only saw one man roll out a carpet to pray.

Especially on Fridays, you can see people going into a mosque, but daily life there does not revolve around religion – especially since they particularly like to drink a lot of alcohol on Fridays, which is supposedly forbidden in Islam. 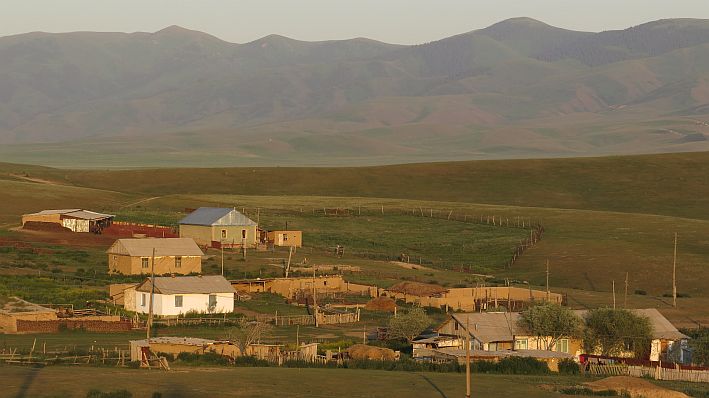 In the morning, while I was packing everything together on the village meadow, people came out of 3 different houses and to invite me for breakfast. Really super nice people! 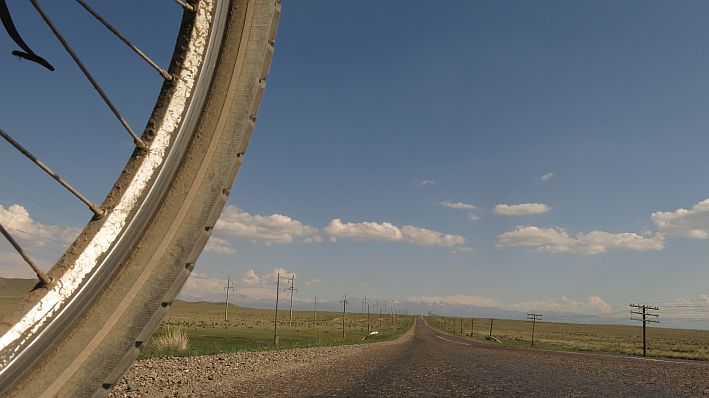 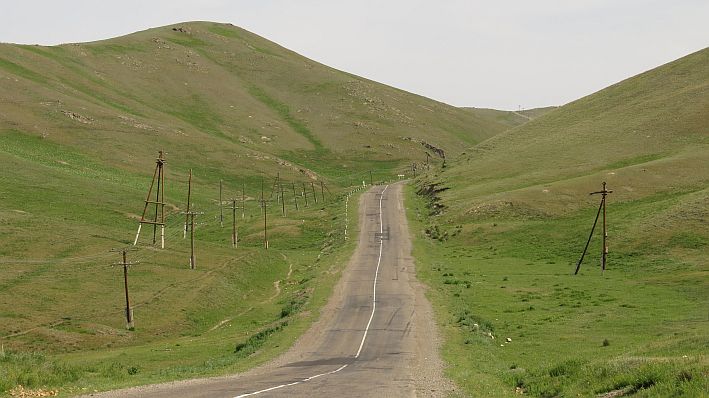 The road ahead continued downhill with many switchbacks and, because of that, the heat became more and more unbearable.

The landscape was changing continuously from mountain and meadow landscapes into vast steppes.
The road then continued straight as an arrow and on the horizon there was absolutely nothing to see. 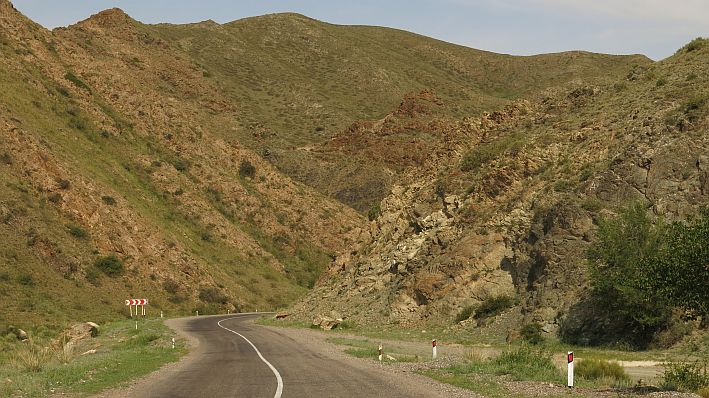 Luckily, I passed several villages which brought some degree of variety into the journey.

In the evening I searched again for a place to pitch my tent, but here again I was invited into a house and this time I gladly accepted the invitation. I was even allowed to shower and wash my clothes.
The shower was outdoors. A bucket that even had a watering canister spout. The water was cold, but in the heat it was an ingenious way of cooling-off.

Someone fetched an English teacher who unfortunately already had difficulties with the sentence “What is your name?” Despite everything, in my short time in Kazakhstan I met more people who spoke English than in all seven weeks in Kyrgyzstan.

The level of education seemed to be generally higher and what the people said was mostly correct.
I could also tell that they were able to follow my thoughts and could better empathize with foreigners.
When they gave me a number and I let them know I didn’t understand, they immediately got out a calculator to help. In Kyrgyzstan, I always had to tap around on their calculator until someone understood what I wanted.

Finally, the old familiar trick with the translation program came to fruition, something that is completely unknown in Kyrgyzstan. So we sat long into the balmy night typing phrases into an iPhone, allowing it to translate for us and tried to communicate that way.

The daughter in the house had an English book, which we leafed through to ask and answer standard questions. They showed photo albums to me and, of course, I acted as if I was totally interested in the wedding of Aunt XYZ.

Eventually, at one point it became uncomfortable because they packed out the vodka. Soon, they began to slur and babble and I excused myself and went to bed. Luckily they let me sleep in peace.

At breakfast time, the vodka was back on the table again and one of the guys really got on my nerves.
It was time to move on. 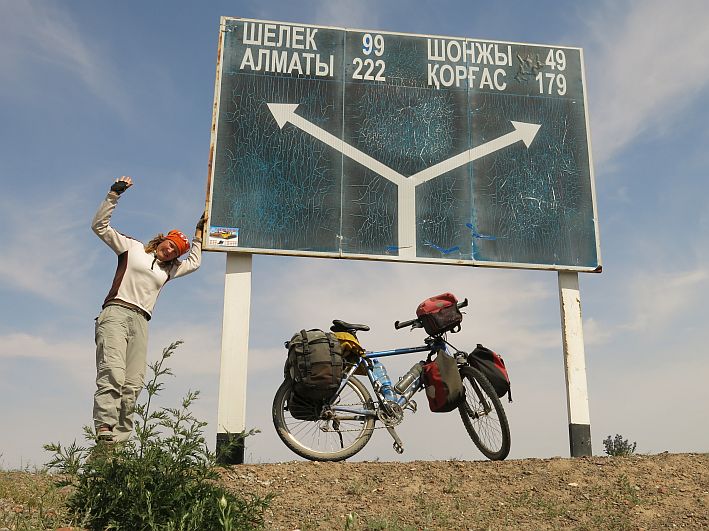 I met two Frenchmen cycling from Bangkok to Paris. They gave me 4 flash cards with translations that I could use to ask for campsites, a shower, food and a place to stay for the night in China.
Very useful. 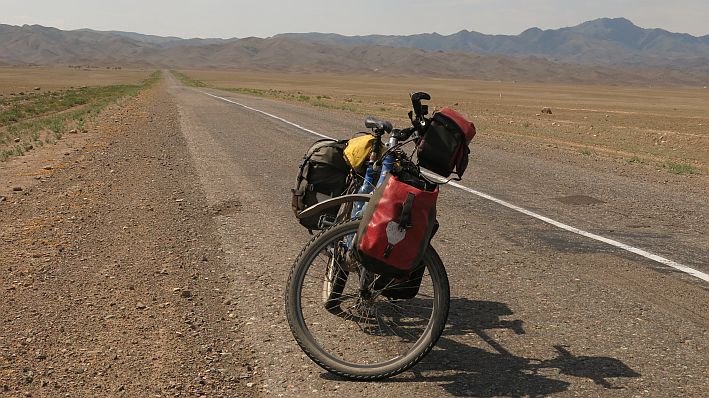 My last evening in a small village close to the Chinese border became somewhat ugly.
I asked for a place to camp and was again invited to stay in someone’s home. It’s very pleasant thing about the people here because they are super hospitable.

The children would run after me, many people waved to me, and after being invited in, no one ever asked for money. Also, no one tried to cheat me all the time. 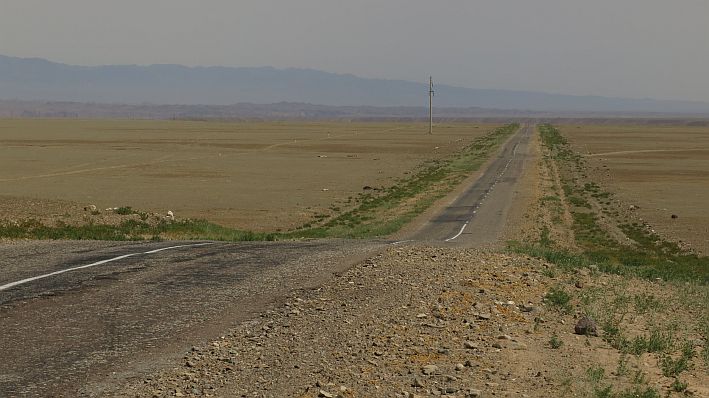 The lady of the house gave me Lachman and tea. The tea is always already prepared and on the table.
There was milk, black tea and some kind of lard. No sugar. When I had eaten two servings of Lachman,
which tasted similar to the Lachman in Kyrgyzstan, I realized immediately that something was not right.

I ended up with abdominal cramps, diarrhea and vomiting. The squat toilet was especially uncomfortable; it was totally disgusting and located outside the house. Somehow, I made it through the night and was tormented the next day for the remaining 20 kilometers to the border town.

I stayed there in a small hotel out of necessity and tried to regenerate myself. I only had one day as a buffer, so the next day I had to cross the border to avoid paying the compulsory registration penalty fee and hoped that I would be fit again by then. 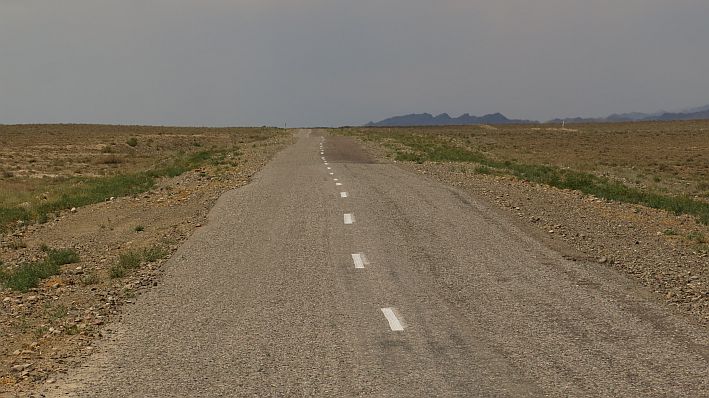 All in all, it was a pity that I didn’t have more time to spend in Kazakhstan because I think it would have been worth it to stay longer because of the people. I had seen only a gnat’s turd of that vast country and I asked myself when I crossed the border what it might be like in other parts of the country. 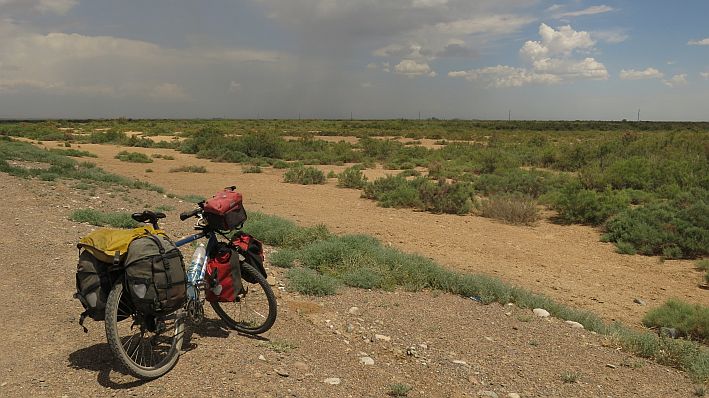 A new chapter of my world cycling trip had begun. Although there are still Uyghur Muslims in the Xinjiang Province in China where I would go next, regardless, the Muslim countries had come to an end.

I’ll tell you quite honestly that I was somehow glad about that. Overall, I had spent about 9 months in Islamic countries and I’d had enough.
Now, I’m looking forward to my favorite religion, Buddhism.

Off to Gdai – as they say so beautifully here – on to China.